Minneapolis, MN – Disasters like Hurricane Katrina, Japan’s recent recovery efforts and the earthquake that hit Haiti affect not only people but their pets as well. “Under a law passed by Congress after Hurricane Katrina, every state must have an animal disaster rescue plan in place. Without such a plan, the state would be ineligible to receive federal emergency disaster relief, said Charlie O’Brien, chairman of the Minnesota Animal Disaster Coalition, a group of about 25 government agencies, humane societies and other nonprofits. Not only does Minnesota have such a plan, but counties now are in the process of devising them, as well, he said.”

Non-profit animal welfare rights groups and human societies are renowned for rushing to the aid of distressed animals caught in natural disaster areas. Today, plans are both critical and essential to performing rescue operations and to sheltered pets in the event of a disaster both nationally and internationally. “There’s a significant industry out there specifically focused on animal disaster relief, especially pet companions,” said Keith Streff, a coalition member and senior investigator at the Animal Humane Society in Golden Valley. Right now we’re on standby in case of Minnesota flooding.”

Last month in Japan, the non-profit World Vets animal welfare disaster relief group headquartered in Fargo North Dakota. Its founder is a veterinarian named Cathy King, who resides in Fargo. The organization was founded in 2006 and today finds itself on the front lines in animal-disaster relief.

“We had a first-responder team en route to Japan within 72 hours,” said King.”We’ve shipped more than $100,000 in veterinary supplies, antibiotics, cages, IV fluids, cat food, dog food and thousands of leashes and collars.”

After working for over four weeks since the earthquake, the team’s focus has shifted from helping to recover the animals to finding their owners. We need to know, ‘Do they still have owners?”’ said King. “Are the owners still alive? They have a huge animal situation going on right now.”

World Vets and other non-profit animal welfare organizations rely on the donations from individuals and Foundations such as Fondation Bridgitte Bardot, Maria 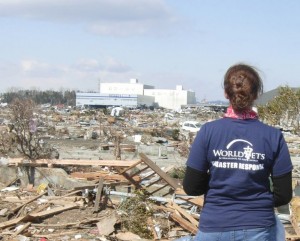 Norbury Foundation and Abbott Animal Health. “While government grants paid for some rescue supplies, a great deal is donated by individuals and businesses, said Streff.”

“Individuals make a significant show of philanthropy when they see a need, donating cages, blankets, food,” he said.”And there are donations from industry, such as Pet Food Warehouses, Home Depot, Purina and others. There’s something about seeing an animal, stranded on a roof, surrounded by water, that pulls on heartstrings, said Streff, adding, “It creates an outpouring of support.”

To learn more about the World Vets animal welfare organization go to http://www.worldvets.org/