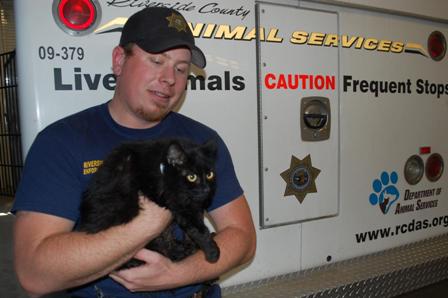 Imagine being out for a drive on the freeway and noticing a cat that looks like it’s getting ready to either jump or fight off traffic.  That’s exactly what happened to the many drivers who called in to report the fragile situation, in the hopes that someone would come to the cat’s rescue.  The 1-year-old black feline was sitting on top of a concrete barrier that overlooks the 60 Freeway in Mira Loma, clearly trying as hard as possible to avoid the traffic speeding by.  Animal Services Officer, Gary Pahls, quickly arrived on the scene to help the cat out of this dangerous situation.

Upon arriving at the scene, Pahls immediately knew the rescue would be no small feat.  “I saw this cat was up about 200 feet on the highest bridge and was up on the barrier, hanging off the edge trying to get away from traffic,” said Pahls.  “[She] was as far to the edge as possible to get away from the traffic without falling over the side.”

Enlisting the help of the California Highway Patrol to help slow traffic, Pahls was able to safely approach the cat, who was rather calm considering the situation.  “She was seeking refuge from freeway motorists,” Pahls said.  “She found a relatively safe spot, despite just inches from a 200-foot fall.”  Pahls went to say, “The cat was very happy, and I was very happy to get her off there, she was very calm and relaxed.”

The rescued cat was nicknamed Mira, short for Mira Loma.  Once Mira was safely rescued, it was determined that she could be pregnant.  Following the trying ordeal, Mira was placed into the caring hands of the Department of Animal Services’ Veterinary Services Division in California.