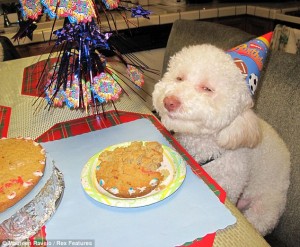 After being presented with a cake signifying his very first birthday, Riley, a Bichon Frise-poodle mix, displayed for his owners the silliest looking grin, literally from ear to ear!  Thankfully for dog lovers everywhere, the smile was captured on camera, and eventually posted to Facebook where Riley quickly became a celebrity.

Maureen Ravelo, Riley’s owner and resident of San Jose, California, was lucky enough to have grabbed the camera just in time to capture forever the look on Riley’s face.  He certainly was happy to be turning one!  It took about a month for Maureen to put the picture on her Facebook profile, just to share it with her friends.  That day, a friend of Ravelo’s, John Lipari, saw Riley’s picture online during a class, and posted it on Reddit.com.  That is what catapulted Riley into overnight viral super stardom.  Since then, countless blogs and Web sites, including The Huffington Post, caught on to Riley’s hilarious smile, referring to the pup as “The Birthday Dog,” “Smiley Riley,” and the “Stoner Dog.”  One Web site even Photo shopped the smiling puppy into the arms of President Obama.

After being away at college, Maureen was welcomed home by Riley, and is when she started noticing the dog’s funny attributes.  “He smiles a lot, especially when you come home from work, he’s really happy to see you,” she says.  “He can do different faces every single time.  Whenever I try to pet him when he’s asleep he gives me this look like, ‘Leave me alone, I’m trying to sleep.’  He’s known for that.  Part of him is pretty snobbish, but for the most part, he’s just a pampered poodle with a playful attitude!”  Riley’s face was so expressive that Maureen frequently forgets he is a dog.

Maureen and her family were taken by surprise with all of this publicity.  “I’m actually happy that a lot of people really enjoy Riley’s picture because it was just a random picture that I posted,” Maureen tells PEOPLEPets.com.  “I didn’t think that it would get so huge!”

Well, that was last year.  Yup, you guessed it, Riley’s back on Facebook with his signature smile while turning two.  Maureen, now 23, couldn’t resist throwing another party for Riley, complete with capturing his toothy grin!