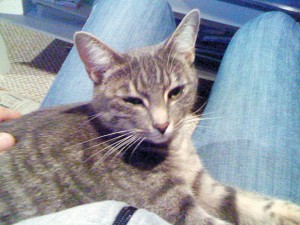 Burnaby, B.C. – A Burnaby couple, Robin and Lisa Hoare, were so upset about losing Luna, their one-year-old gray female tabby cat, they decided to pay Harry Oaks a Pet Detective $1,000 to find her. “We got our two cats, Luna and Bear, around the time we got engaged in January 2010,” said Hoare Wednesday. “We figure they were born, we always say, on the day I proposed to my wife. They’re sister and brother and were found in a Dumpster.” On February 4th the two cats accidentally got out from the couple’s home and only Bear returned.

The Hoare’s searched the neighborhood, put-up posters and checked with local shelters in an effort to find Luna. Unfortunately, the couple was unsuccessful. Hoare explained that “For the first week, Bear was not eating much at all, just wandering around the house crying a lot. He’ll sniff around the spot where Luna used to sleep, cry a bit and fall asleep right there.”

Five days later, the couple engaged Oaks, a professional tracker from Longview Washington who runs International K-9 Search and Rescue Services. The company boosts an impressive record with a 95% success rate according to their website. Last Thursday night, Oaks along with Willow, his border collie, set out to find Luna and immediately picked-up the scent and followed it for 10 kilometers to New Westminster.

“We originally feared that coyotes or something had got her, but from what he tracked, it looks like maybe a transient or someone picked her up and put her in his cart,” he said. “Where we were looking those five days before, we were way off base, so it helps we can narrow it down. We’re hoping whoever has her will travel that route back.”

Although Oakes and his dog team failed to turn up the cat after a five-hour search, Hoare said he and his wife, Lisa, at least now know exactly where Luna disappeared. Oakes’ dogs were able to at least track her to a nearby park where the trail went cold. “He’s done search and rescue professionally for about 40 years,” said Robin Hoare, a clothier who designs custom business suits. “We brought him in maybe five days after she went missing as . . . a last resort.”

The couple still has Luna’s brother, Bear, and Hoare said they hope the other cat will come back. Oakes said that whoever took the cat knew the city and took short cuts around schools and across railway tracks.

If anyone has information regarding the whereabouts of Lune should call 778-996-2959. The couple is offering a small reward for Luna’s return.