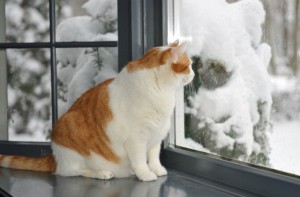 Manhattan, NY – Surprising but true, the recent sale of a seventh floor loft style apartment in Manhattan can be directly attributed to the family cat, a beige male, that was present and accounted for during each of the times the buyers visited the apartment.  The couple, Mr. Lightman and Ms. Batalion, were delighted at the prospect of buying the loft after the first showing.

“We have a cat ourselves, a graceful adolescent tabby that was a rescue animal,” said Ms. Batalion, a writer and performer. “But unlike our Shpilkes, who is anxious and standoffish, this one was incredibly friendly.  When we came to visit the apartment, he’d invite us in and practically show us around.”  Mr. Lightman added, “we were so flattered by the cat’s attention.  He was so warm and social.  He’d climb on anyone, even our real estate broker and us.  He made the apartment feel lived in, homey.”

Contrary to what any real estate professional would say, this particular cat was the deciding factor in the decision to purchase.  Starr C. Osborne, founder of a home staging firm called Tailored Transitions, wrote in her book, “Let’s face it, as much as we love them, they tend to be dirty and smelly, and — like dreams — they’re often not as interesting or endearing to others as they are to their owners.”  Citing the number of house-hunters with allergies, she added, “The best pet when staging your home is no pet.”

Evidence against the age old statement, “remove pets and all evidence of them for showings,” can also be seen with the instance of Wraggles, a Cavalier King Charles spaniel who seemed to know exactly how to show a place, as if by instinct:

“Wraggles curled up on an upholstered chaise in the living room, next to a window overlooking St. Regis Church,” said Cristina Cote, the Corcoran Group broker who handled the sale with her mother, Victoria Terri-Cote.  Wraggles proved such a crowd pleaser that the brokers requested that he be present for all future showings.  He was sent to a doggie spa beforehand so he would look his best, and like clockwork, before the doorbell rang and visitors entered, he would take his place on the ivory and beige chenille chaise next to the window, framed by the treetops and the stone church tower.”

One Halstead broker, Barry Silverman, frequently includes his own Jack Russell terrier, Sammy, in photographs of pet-friendly apartments that accompany his listings.  “People remember the place better in putting their lists together,” Mr. Silverman said. “They’ll ask for the one with the Jack Russell on the stairs.”