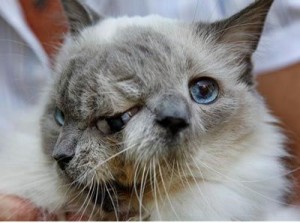 Worcester, MA – Probably the most unique and rare cat in the world, Frank and Louie not only has two names, but two faces, two noses, two mouths, and three eyes.  You wouldn’t expect an animal born with this kind of genetic defect to be able to survive very long, but Frank and Louie proved everyone wrong by turning 12 years old on September 8, 2011.  He has since then found himself in the Guinness World Records as the longest living Janus cat, a group named after a Roman god with two faces.

His story began on day one of his life when he was taken to the Cummings School of Veterinary Medicine at Tufts University to be euthanized, as he was not expected to live.  Current owner, Marty Stevens, happened to be working that day, took one look at the unusual cat, and decided to take him home instead of putting him to sleep.  Janus cats are not expected to live due to the number of problems they are born with, from congenital defects to the difficulty they have eating.

Stevens was determined to give this cat a good life, and started by using feeding tubes.  Steven’s decision to raise Frank and Louie turned out to be the best decision!  “Every day is kind of a blessing; being 12 and normal life expectancy when they have this condition is one to four days,” Stevens said.  “So, he’s ahead of the game; every day I just thank God I still have him.”

Colleagues and experts had tried to change Steven’s mind about raising Frank and Louie, explaining that she shouldn’t get her hopes up.  Today they say something else entirely!  “The condition itself is very rare, and I think that the fact that this cat became an adult, a healthy adult, is remarkable,” said Dr. Armelle deLaforcade, an associate professor at Cummings and head of the emergency services section.  “You can look at a cat like this as either a very strange and bad omen, or you can look at this cat as a miracle.”

Frank and Louie has grown up to be a laid back, friendly cat who walks on a leash and loves car rides!  “It’s funny because people walk up to him thinking it’s a nice, fluffy white cat and they’re walking up with a big smile on their face to pat him, like, ‘Oh, what a beautiful cat’ and I see a look of horror come over their faces when they actually see his face,” Stevens said, laughing.

Take a look at Frank and Louie, the cat who set a new record!