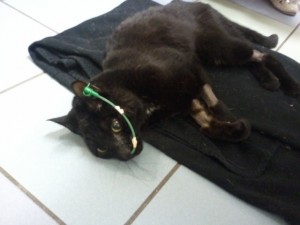 Manhattan, NY – Nothing short of a miracle, a 16 year old cat has escaped certain death without breaking any bones or serious harm after falling from a window 20 stories above ground.  It is thought that the cat may have been interested in a bird sitting on the ledge, just outside the window that owner, Barry Myers, left a few inches open.  Thankfully, the cat, which goes by the name Gloucester, was found quickly after the fall and taken to the vet, where it was clear he was going to be just fine.

What began as a happy holiday weekend for owner Barry Myers, his wife, and five year old child, ended with what could have been a tragedy.  To celebrate the 4th of July, Myers and his family left their apartment in search of fun in the sun in Cape Cod, leaving Gloucester at home.  Myers made arrangements with his neighbor to make sure Gloucester was going to be fed, but when the neighbor arrived, the cat was nowhere to be found, so the neighbor called Myers to alert him of the missing cat.  “She didn’t see him anywhere in his usual nooks and crannies, and after searching the entire apartment she noticed the crack in the window,” said Myers.

The neighbor then realized that a security guard and another tenant had already discovered that the cat had in fact fallen out of the slightly open window and landed on the pavement.  Gloucester was immediately rushed to the vet, where he spent the next three days in the ICU undergoing neurological exams.  The tests showed no signs of damage, no broken bones, and no other signs of physical harm.

Myers was completely surprised that Gloucester has found himself in this position!  “In the six years we’ve lived in the apartment, I’ve never seen him interested in the window,” said Myers.  “I think something may have flown by and he took a swipe at it with his paw.”  Since the ordeal, Myers has dubbed Gloucester “Super G”, and feels very happy and lucky that the cat is going to be okay!