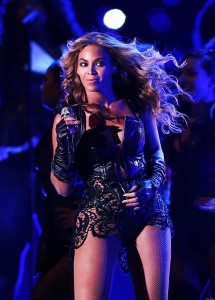 Famed vegetarian Morrissey recently added Beyonce to his list of not-so-animal-friendly celebrities. The singer told a Los Angeles crowd that Beyonce’s handbags are aiding the extinction of rhinos.

“The rhino is now more or less extinct, and it’s not because of global warming or shrinking habitats. It’s because of Beyonce’s handbags,” he told the crowd.

Morrissey isn’t alone in his Beyonce bashing. Others also use Beyonce as an example in the hot topic of animal rights. PETA has claimed that some of the megastar’s shoes have come from the skin of snakes, stingrays, and other animals. They also attacked her Super Bowl halftime show outfit for containing python and iguana skin.

This recent focus on Beyonce’s wardrobe is not a new phenomenon. Celebrities have long been criticized for which way they fall on the animal rights front. Celebrities like Anne Hathaway, Natalie Portman and Lea Michele boast their animal-friendly choices, while Paris Hilton and Nicole Richie don’t exactly hide from wearing things like fur.

Do celebrities have an obligation to be animal friendly?

At last check, it wasn’t exactly illegal to wear leather, fur, or snake-skinned outfits. Why then are celebrities taking a lashing? If the majority of us took a look at our closets (or our car interiors), we’re sure to find plenty of shoes and belts made out of leather, yet we’re not publicly criticized. Should stars such as Beyonce take the heat because they choose to wear clothes made from more exotic animals?

Before you answer, consider some of these facts:

There are hundreds of sites out there that offer genuine exotic leather made from:

These animals are not endangered, as, say, the rhino. Some may be exotic in the US, but aren’t elsewhere. Yet many of us would be appalled at the idea of an iPhone case made out of ostrich, though we strut around in cow-leather shoes.

According to PETA, the global leather industry slaughters more than one billion animals each year for leather. While most leather in the US is made from cow, a significantly large portion can be traced to:

Is there a line that should not be crossed when it comes to wearing animal skin? Is cow okay, but ostrich is not? Are exotic animals off limits, but more conventional ones are fair game?

Celebrities like Beyonce are easy to target for their choices, but is a snake-skinned outfit any different than leather shoes? Unless we’re as radical as PETA and vegans (which, by the way, Morrissey is not, he’s a vegetarian), is it actually fair to make such critiques?

5 Tips for Gaining Rent Approval with a Pet

In the Art of Dancing, Animals Take Top Spot