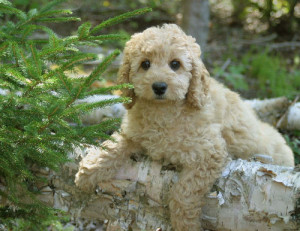 In recent years there has been a proliferation in mixed breeds dogs being sold as designer dogs. They are a cross between two purebred dogs, one of which is often a poodle. These dogs have been sold for exorbitant prices and many breeders have claimed the dogs were healthier, hypoallergenic, etc. The trend began when Wally Conron, breeding manager of the Royal Guide Dog Association of Australia 22 years ago, was asked to breed a hypoallergenic guide dog for a woman in Hawaii whose husband had allergies. He tried several purebred standard poodles but they did not have the right personality for the job so he crossed his best Labrador retriever bitch with a standard poodle and nicknamed it the “labradoodle” in an attempt to put a positive PR spin on it.

Conron now regrets his creation. He notes that many labradoodles are not hypoallergenic and that the guide dog group would send out hair and saliva samples before deeming a dog hypoallergenic which is something that many breeders of labradoodles do not do. Many groomers will agree that the type of coat in this mixed breed is not at all fixed and can vary quite a bit. Conron also notes that because people have jumped on the bandwagon in an attempt to make money, they do not do the health testing that responsible purebred dog breeders do to ensure that their stock are healthy and not carrying genetic diseases. This has resulted in labradoodles with many health issues.

The University of California, Davis, set out to see if mixed breed dogs were healthier than their purebred counterparts in a five year study which was recently published. They reviewed the health records of over 90,000 canine patients of the university clinic over a five year period. They looked for diagnoses of 24 different known genetic health issues including hip dysplasia, four different types of cancer, patellar luxation, aortic stenosis (heart problem), dilated cardiomyopathy, bloat, cataracts, epilepsy, ruptured cranial cruciate ligament, and lens luxation (eye disease).

There were ten disorders which did occur more frequently in purebred dogs than in mixed breeds – these included hypothyroidism, dilated cardiomyopathy, aortic stenosis, allergic dermatitis, intervertebral disc disease (IVDD), cataracts, elbow dysplasia, epilepsy (four forms),  and portosystemic shunts. Mixed breeds were more likely to suffer from ruptured cranial cruciate ligaments than purebreds. The scientists are using this data to help determine when mutations have occurred that lead to a disease. Some, such as the ones showing no difference between purebred and mixed breed dogs are likely much older and more widespread in the canine population than the ones found more frequently in purebred dogs. Even within the latter group, there is a range of how likely a disease is to occur. For example, cataracts occur slightly more frequently in purebred dogs while dilated cardiomyopathy is more than three times more likely to occur in purebreds. Regardless of where you buy your dog, you should always look for health clearances on the parents of a litter that was bred on purpose ( as opposed to a dog you adopt from a shelter of unknown background) to help avoid any of the diseases discussed above.