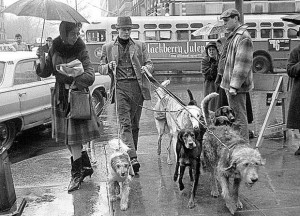 Anyone who’s been to NYC will notice that, despite it seeming like anything but a dog’s paradise, many dogs walk along city streets, and navigate through retail stores. Dogs are a normal part of everyday life in NYC.

Of course, dogs are still dogs, meaning they need to walk, and get their exercise and socialize. With most homes in NYC being the size of a closet, and without yards, coupled with New Yorkers working long hours, it’s hard to give your dog what he needs – a good walking.

Jim Buck recognized, back in the 1960s, that not only were New Yorkers getting more dogs, but they were working longer hours. He decided to do something about it. He started offering his services as a dog walker. Buck, known as the first professional dog walker, died on July 4, in Manhattan, from complications from emphysema and cancer. He was 81.

Buck was no stranger to dogs. His wealthy family showed Great Danes and trained horses, but, after skipping college, Buck opted to go into sales. When he realized that there was a need to help dog owners care for their dogs, he left his salesman job and began Jim Buck’s School for Dogs. He and his assistants would walk up to 150 dogs a day, in rain, snow, heat … it didn’t matter. Dogs needed exercise no matter what, and Buck wanted to offer it.

His decision to leave his sales job paid off. Soon after he started his dog-walking business, he was pulling in $500 per week, more than he made selling electronics. People could see Buck (and all 145 pounds of him) walking up to 6 or 7 dogs at one time up and down the East Side. As the New York Times cited in 1964, Buck resembled “Charlton Heston in the chariot-racing scene in ‘Ben-Hur.’”

Buck retired more than a decade ago. With his retirement came the end of Jim Buck’s School for Dogs. But just because he closed that chapter of his life, doesn’t mean his legacy is gone. New York City is filled with dog walkers pulling (or being pulled by) 6, 7, or even more dogs at one time. Many of these current dog walkers worked with Buck, or knew someone who did.

Nowadays, across the country, the idea of hiring a dog walker is commonplace. Even in smaller towns, dog walkers can make a respectable living. Rather than take your dog to a daycare all day, hiring a dog walker allows your pet to stay at home, where he’s most comfortable, yet still get time to socialize and exercise.

And dog walkers are tailor-made for cities. There are many people out there who prefer to live in a city. At the same time, many of these folks want the company of a dog, but are afraid the city environment isn’t conducive for their pet. Dog walkers have helped bridge the gap between city life and a life fit for dogs. Buck’s legacy certainly lives on.