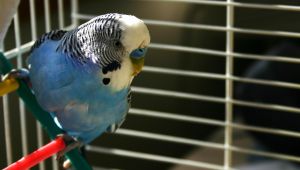 Because birds are prey animals, they’ll mask signs of illness until they can’t fake it any longer. This helps them survive in the wild, where predators look specifically for the weak and ill animals in a flock in order to take them down more easily. As a bird owner, therefore, you need to be aware of the common signs of illness so that you can get your pet bird help as soon as possible. Keep in mind, though, that once symptoms occur, the bird is usually very sick, so treatment may be difficult. If your pet bird is showing any signs of neurological problems, such as seizures, if he is having difficulty breathing, or if he is injured or weak, bring him to an avian veterinarian to be examined right away.

Below are just five of the many signs that indicate your pet bird isn’t feeling well. As with all other pets, keeping a close eye on your bird and really learning his personality will alert you to any changes that would indicate something is wrong.

Sitting at the Bottom of the Cage

A healthy bird will sit on a perch and move around throughout his cage during the day before finding a spot to sleep at night. If your bird is spending a lot of time at the bottom of the cage, this could be a sign that he isn’t feeling well.

In addition, if your bird is having difficulty maintaining balance while sitting on a perch, or if his tail is bobbing a lot with every breath he takes, these are also signs of illness.

Knowing how much your bird typically consumes every day will help you gauge whether or not he isn’t feeling well. This can be difficult with a cage that has multiple birds, but do your best to see how much food and water is ingested each day. If your bird’s appetite decreases, or he’s making motions to eat but is actually dropping more than he’s eating, have him examined by a vet, as these are symptoms of illness.

Change in the Appearance of Droppings

A healthy bird will have clear eyes that don’t have any discharge or signs of redness and irritation. The nails and beak should be a normal length, as rapid overgrowth could indicate illness or malnutrition. The nose should be clean as well, without any discharge. The feathers, too, will be smooth and clean in a healthy bird, whereas a consistently ruffled appearance could indicate he’s not well.

By having a basic understanding of what a healthy bird looks and behaves like, you’ll be able to spot early signs of illness and get your pet bird the necessary treatment to recover. Just remember that many symptoms don’t appear until disease is advanced.