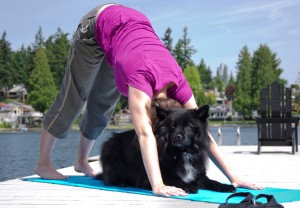 With Yoga popularity and dog ownership on the rise, it’s no surprise that the two should meet someday and form a lasting (if not strange) relationship. A relationship where energy, breathing, and fleas share a mat. A relationship known as Doga.

But can your dog really “do” yoga?

Doga is everywhere these days, and with it comes a swirl of praise and controversy. It seems not everyone knows what to think of yoga with your dog. For example, Yogi Julie Lawrence, from Portland, Ore., recently told the New York Times that she’s all for unity with all beings, but that a yoga class may not be the right setting for this task. “Doga runs the risk of trivializing yoga by turning a 2,500-year-old practice into a fad.”

But for every Julie Lawrence out there, there’s a Brenda Bryan, a yoga/doga instructor from Seattle. “It’s a new field so there can be confusion about what doga is and isn’t,” she told the NY Times. “Who cares if everybody’s facing the same direction and doing exactly the same thing? Besides, laughing is spiritual.”

Bryan brings up a good point – there is confusion about what doga is, and isn’t. Some doga classes actually try to place the dogs into certain poses, while many more (and the more successful ones) just have the dogs come for the ride. The latter styled class follows the belief (shared by dog trainers including Cesar Millan) that dogs feed off of or energy. When we’re in a balanced state (the goal of a yoga practice), our dogs will be balanced as well.

Can a dog actually perform yoga?

As a certified yoga instructor myself, this question’s a bit tricky to answer. For the majority of Americans out there, yoga means poses and stretches. But that’s such a small portion of yoga (a great image out there depicts an iceberg. The exposed above-sea portion is the poses. The larger, more submerged part of the iceberg is the rest of yoga). So, in fact, it’s quite possible that the live-in-the-moment, forever happy, wants-to-please-others-in-eternal-servitude being, known as the dog, is far more advanced in the practice of yoga than we’ll ever be.

But you want to know about the poses.

Well, it’s no surprise that your dog is the preeminent practitioner of the downward facing dog. But unless you’ve trained your dog to get into that pose on command (by saying Namaste, for example … yup, one of my dogs is a yogi rockstar), your dog isn’t really cut for yoga class. There’ll be no warriors, and no headstands. And the only way you’ll see a flipped dog (that’s an inverted downward facing dog) is if you quite literally flip your dog. What that means is that Bryan’s style of less-rigid doga classes is right on. Besides, it’s not even like your dog needs the poses. Yoga poses (asanas) are a way for us to delve into the greater meaning of yoga. We’ve already mentioned how advanced our dogs are in that aspect. So no, it’s not your dog that needs yoga poses. You need the poses. But your dog needs you. That’s the point of doga, to spend more time with your dog, in a supposedly calm and relaxed state (unless you’re indulging in hot yoga or Bikram).

If your goal is to literally make your dog perform fancy tricks like Ahshtahvahkrahsanna (the eight-angle pose), or my favorite yet simultaneously least favorite pose, Vrischikasana (Scorpion pose), then you might as well get a stuffed animal instead, because you’ll have far more luck.

Larger cities like NYC, Atlanta, Seattle, Portland and LA have an emerging doga sub-culture. Some yoga studios are looking for a way to bring in new clientele, so if you’re local studios don’t offer it, ask if they might someday. Currently there is no formal training required to teach doga, however, with that many dogs in one room, having a qualified dog trainer might help. If you have a knack for working with dogs (and/or have a love of yoga) you may want to offer up your services to a local studio. You never know if you might be the reason your town or city is the next doga hotspot.