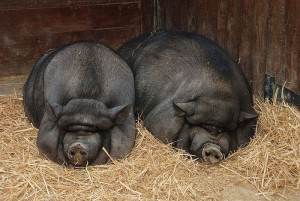 George Clooney’s longest relationship to date isn’t with some long-legged model or ex-female-wrestler. It’s with a pet pig named Max. Max, a Vietnamese pot bellied pig, lived with Clooney from 1998 to 2006, at which point Max died, much to the devastation of Clooney. Max often slept in the same bed as Clooney, and perhaps even saved the star’s life, when he woke Clooney up just before the Northridge earthquake.

It seems Clooney’s love of pigs isn’t a rarity.

The pot bellied pig has become a popular house pet, for all the same reasons that George Orwell used them as his leading role in Animal Farm. Pigs are:

In fact, many people have compared pigs to dogs, in the fact that a pig can be house trained, leash trained, and will perform a few tricks. However, it’s commonly accepted that pigs are, often times, even more intelligent than dogs. This can have adverse effects for you, the potential pig owner.

Think about your child (if you have one). When he or she was really young, it was easy to care for them (easy, relatively speaking). You told them what to do, and they did it. Then a few years passed and they got a bit smarter, and started to question you, perhaps even stand up to you. Suddenly taking care of them became a challenge.

The high intelligence of a pig, while in many ways an attribute, can make your life as an owner quite challenging. This intelligence requires them to be actively engaged, lest they get bored and destructive. It also requires you to be ever-so-vigilant in ensuring your pet pig doesn’t cause harm to your home or others.

Pigs are also, well, pigs. They love to eat. Their high level of intelligence can arm them with the ability to open up cabinets and refrigerator doors if you’re not careful. They can mimic things they see you do, such as pull handles and turn knobs (yup), so you better be ready to either give your pig plenty of outdoor space to run around in, or take him for long walks to tire him out.

One of the reasons why people think pigs make good pets is because they have a pack mentality, just like dogs do. This means that, if trained properly, they can view you as their pack leader, thus respect you accordingly. Also, this usually makes them decent family pets, as they will find a way to fit into the unit.

However, as with any pack animal, you flirt with the potential of alpha-dog issues. Pigs can become aggressive and territorial if you allow them to assume the role of alpha. How do you avoid this issue? You really have to treat your pig as you would a dog – set boundaries and rules, and reward positive behavior (just don’t reward them with pork treats, that’s just wrong).

Pigs are not like dogs when it comes to size

The reason why miniature pot bellied pigs are so popular is because of their size. They’re much more manageable inside a home than a pig grown for food production. But don’t let the term “miniature” fool you. A really small miniature pot bellied big will grow to be at least 125 pounds. Clooney’s pig Max eclipsed 200 pounds.

The unfortunate similarity between pigs and dogs

Shelters aren’t just where dogs go to wait for a new home. Hundreds, if not thousands of pigs each year are abandoned by owners who were not prepared for the work and effort it takes to raise this kind of animal. PIGS, a Sanctuary, alone, houses more than 200 pigs at any given time.

It’s easy to fall in love with the idea of raising a pig. Believe it or not, they are actually cleaner (and smell cleaner) than dogs. But they take as much work, if not considerably more, than your typical dog. This comes as a surprise to many owners, who end up dropping their pigs off at shelters because they have no other option.

Before you run out and get a pet pig named Bacon, do your research. This research goes beyond Internet surfing. Find someone who owns a pet pig and watch them in action. What does their house look like? What does a normal day look like? Then ask yourself, can you really raise a pet pig for up to 20 years?