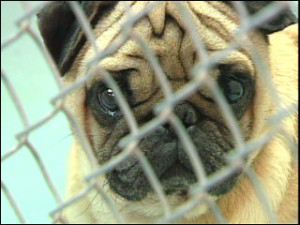 San Diego is the 32nd city to ban the retail sale of puppy mill pets. The new pet store ban will restrict retail stores from selling animals from potentially irresponsible breeders. The new law now requires retailers to work with city or county animal shelters, human societies and nonprofit rescue groups in place of puppy mill breeders. Pet stores will be required to have documentation for each pet.

The legislation passed by unanimous vote last Tuesday, following more than two hours of testimony from pet-shop owners and animal-rights activists. The ban includes commercial breed dogs, cats, and rabbits. “These animals live their entire lives in small cages. They never touch the ground, they never have a name never have a toy,” said Sydney Cicourel of the Companion Animal Protection Society.

Specifically, the law prohibits “for any person to display, offer for sale, deliver, barter, auction, give away, transfer or sell any live dog, cat or rabbit in any pet shop, retail business or other commercial establishment located in the city of San Diego, unless the dog, cat or rabbit was obtained from a city or county animal shelter or animal control agency, a humane society or a nonprofit rescue organization.”

Pet stores have six months until the law goes into effect. The penalty for continuing to sell commercial breed animals starts at a fine of $250. Results from similar laws have been positive. In Albuquerque, New Mexico “since the ban started, animal adoptions have increased 23 percent and euthanasia at city shelters has decreased by 35 percent” according to NBC news.

San Diego is one of many cities that have put similar laws in affect. Other animal rights groups have won battles in many southern California cities, as well as Los Angeles.