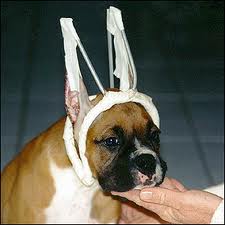 Are pet surgeries that are purely cosmetic a good thing or just money makers for those veterinarians who are willing to perform them?  I am talking about removing the vocal cords, know as a ventricular cordectomies, to keep a dog from barking , ear-cropping , tail-docking and de-clawing to name a few. These procedures are for the owner’s benefit not the animals.

“We are seeing so many more declawed cats on the streets since the recession started,” said Karen Layne, president of the Vegas Valley Humane Society. “They have no way to fend for themselves, or even to get up a tree to get out of the way of danger.”

“It’s amputation down to the first knuckle,” said Dr. David Henderson, owner of Sunrise Veterinary Clinic. “I always try and talk people out of it.” Henderson recommends that rather than declawing your cat you should make use of scratching post, weekly trimming or filing or using Soft Paws which a vinyl caps that glue onto a cats claws.

All surgeries just like in humans are to some degree painful and can carry a risk of death by an allergic reaction to the anesthesia or by having the wound get infected. “I really think these procedures should be outlawed,” said Henderson, who performed ear-cropping himself until 20 years ago. “Then it just dawned on me: What the hell am I doing?” he said. “I’m doing a cosmetic surgery that has absolutely no function. At least declawing and debarking have some sort of function.”I guess I’m a little bit ashamed that I ever did it.”

“You have to understand that people who own the pets, this isn’t like owning a person,” said Dr. Scott Johnson of the Camino Al Norte Animal Hospital in North Las Vegas. “It’s legally like owning property. While there are certain guidelines that they have to adhere to in terms of how they take care of these animals, they’re still the property of a client, and if they’re presenting this situation, where something like this has to be done for them, then that has to be weighed as well — as long as it’s a good home.”

Layne doesn’t believe that muting any creature ever increases that animal’s enjoyment of life and may in fact rob them of the opportunity to alert their owners of impending dangers.  Layne suggests to owners considering any of these controversial procedures: “I would recommend they do these things to themselves first, and then decide if it’s such a wonderful deal.”