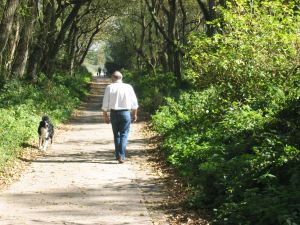 Forget about school districts, weather, food and location. When it comes to measuring a city’s true worth, we all know what’s top dog … our dogs. Finding a bona fide dog-friendly city is one of our top priorities, but what goes into making a city dog friendly? And which cities actually go out of their way to reach such a status? We investigate.

The making of a dog-friendly city

Before we could choose the top five dog-friendly cities, we needed to figure out what exactly went into “dog friendliness.” After some careful consideration, we decided that the following factors should play a large part:

The cities that scored high on all of these factors were the ones who made our top five list. While most of the cities on the top five list are somewhat interchangeable, there is one city that ranks head and shoulders above the rest. And that city is our #1:

#1 Portland, Oregon – Portland is home to no less than 32 off-leash dog parks. That puts it at #2 in the country, behind the much larger, far more densely populated NYC (which happens to have five boroughs worth of parks to claim as its own). Portland is the very definition of walkability, and their vet care is among the most affordable in the country. With plenty of green space around the city and comfortable weather throughout the year, Portland is a dog owner’s paradise. The Tin Shed Garden Cafe on Alberta Street is famous for its dog-friendly atmosphere, and it’s not alone.

#2 Miami, Florida – Let’s travel across the country to Miami, which has a great layout for easy walking. But we don’t flock to Miami for just walking, do we? We could do that anywhere. No, we go to Miami for the beaches, and it’s nice to know your dogs can enjoy the beaches as well, at least a few of them. Haulover Beach features a dog park (one of Miami’s 13) as well as on-beach dog-friendly times. Hobie Beach, known as Windsurfer Beach, is dog friendly, so long as he or she is leashed, and The North Shore Open Space Park has beachfront dog parks.

#3 Seattle, WA – What is it about the Northwest? They know how to cater to dogs, and Seattle sure isn’t an exception. It certainly can’t afford to neglect its dogs. There are actually more dogs than children living within the city, according to Seattle Magazine (based on an official census). Seattle has a number of Doga studios (mix yoga and dog); there are 11 off-leash parks, and plenty of friendly places for owners and dogs to walk and hang. Seattle has 45 pet-friendly hotels, 150 pet-friendly restaurants, like Bark Espresso and Norm’s in Freemont (where your dog can have “dog beer”), and social gatherings like Yappy Hour, made specifically for dog owners.

#4 Washington D.C. – Let’s head back east again, to our nation’s capital, where your dog can have a nice life without ever having to be lobbied for a vote. The city offers surprisingly affordable vet care. Many parts of the city are walkable, and D.C. offers two great swimming venues – Shirlington Park and Glencaryln Park. Both parks feature dog-friendly streams that are popular canine locations.

#5. Minneapolis, MN – We struggled with this one for sure. On paper, it seems San Francisco is the next dog-friendly city in the country, but we omitted it here for two reasons. Firstly, we didn’t have a “fly-over state” featured on the list, and we thought it only right to cover the span of the country. The second reason is San Francisco is extremely expensive to live in (another reason why NYC isn’t on the list), whereas Minneapolis is much friendlier on the wallet, and is quite dog-friendly. Yeah, okay, there’s the snow to contend with. But if your dog loves snow, he’ll love the Twin Cities. In May there’s the Canine Carnival, dog-friendly restaurants, such as the Chatterbox Pub, and plenty of meet-ups with fellow owners. Also, Minneapolis is continuously ranked among the top 10 most walkable cities in the country, making it perfect for a dogs and dog owners alike.

What? Did we leave out your city? Do you think you know a place that’s even more dog friendly? Tell us why!