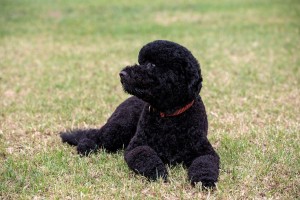 There’s a new face in the White House as Sunny joins the Obama family. Like Bo, Sunny is a Portuguese Water Dog. This breed has a coat that tends to be somewhat hypoallergenic depending on the source of the allergen. Bo is a black and white dog while Sunny is all black. The breed has become increasingly popular in the last few years because of its coat, active and friendly nature. Sunny herself was named for her disposition which tends to be pretty positive.

Four year old, Bo, seemed lonely, revealed the Obamas and so they decided to get him a playmate. Sunny is a year old and Bo is having a great time playing with his lively new companion. The breed generally lives 12-15 years and is fairly active. Sunny has already joined the family’s walking routine. The Obamas are also hoping that the dogs will help keep them company when their two daughters leave home for university.

The Obama administration also caught dog lovers’ attention with a statement against breed specific legislation. “We don’t support breed-specific legislation — research shows that bans on certain types of dogs are largely ineffective and often a waste of public resources. In 2000, the Centers for Disease Control and Prevention looked at twenty years of data about dog bites and human fatalities in the United States. They found that fatal attacks represent a very small proportion of dog bite injuries to people and that it’s virtually impossible to calculate bite rates for specific breeds.

The CDC also noted that the types of people who look to exploit dogs aren’t deterred by breed regulations — when their communities establish a ban, these people just seek out new, unregulated breeds. And the simple fact is that dogs of any breed can become dangerous when they’re intentionally or unintentionally raised to be aggressive.

For all those reasons, the CDC officially recommends against breed-specific legislation — which they call inappropriate. You can read more from them here.

As an alternative to breed-specific policies, the CDC recommends a community-based approach to prevent dog bites. And ultimately, we think that’s a much more promising way to build stronger communities of pets and pet owners.”

Breed specific legislation has led to many family’s having to give up beloved pets that have never hurt anyone and many have likened it to discrimination based on breed rather than an individual’s behavior. Pitbulls in particular remain a lightning bolt for controversy and are banned in many municipalities in North America. It is hoped that the White House statement will help overturn these bylaws.