Having a pet is one thing – but having an exotic pet, well, that’s like having a show and tell 7 days a week. Neighbors, family and friends flock to your home to check out how you, true beastmaster, have somehow brought real-life mother nature into civilization. Not to say dogs and cats aren’t mother nature’s doing, but having a pet dog can seem like having a white t-shirt. It’s been done before.

So, if you’re one of those folks who tossed out your drawer full of plain white T’s, then you’re likely the kind of person who’s got an eye toward the exotic. You may love dogs and cats, but you’re looking for something a bit more unique. You want an exotic pet. But which exotic pet is best for you? When it comes to exotic pets, or pets in general, you want to factor in a few things, including:

So, factoring in all of these components, here are the top 10 exotic pets to own:

1. Bengal Cat – We thought we’d ease you into the world of exotic with something somewhat familiar, such as a cat. But this is no normal cat. This is the Bengal cat, a hybrid breed of cat and Asian leopard cat (not a Bengal tiger, as the name suggests). Much like the hybrid wolf, people love the bengal cat because of its link to the wild, yet these cats are perfectly safe, so long as it’s a few generations removed from its leopard cat ancestor. These cats have a pretty calm temperament but look completely exotic (with their wild cat spots across their bodies).

2. Ball Python – See, we’re still easing you in. The idea of a python is quite exotic, but in reality, the Ball Python is just about the most common exotic pet in existence (common and exotic … an interesting combination). Why are they so common? Well, because aside from fish, they’re just about the easiest pets to care for and can live for decades. The hardest part might be feeding time (choose between frozen or live mice. Both have their upsides and downsides). You’ll need a tank, of course. Ideally it’d be around 40 gallons in size, and should have a good locking system, because your python will likely try to escape a few times. The tank should have a place for the snake to burrow and hide, and be kept between 75 – 90 degrees Fahrenheit (one cool side, one hot side). It should be cleaned quite regularly. Contrary to lore, these particular pythons are rather safe. There’s apparently one report in the US, from a few years ago, of a python strangling its owner. That’s quite the rare event. 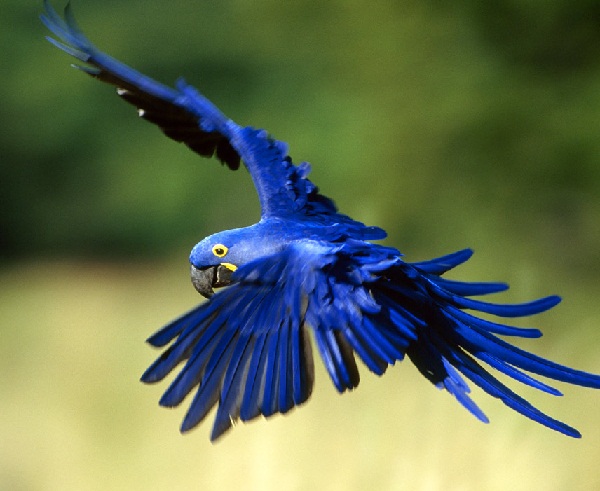 This South American parrot is around 3.3 feet in length, making it the longest of any other parrot. It’s also one of the most recognizable, what with its striking blue feathers and yellow streaks across its mandible and around its eyes. What makes these birds so popular? Well, for starters, we all like pretty things, and it’s hard to argue with the beauty of the Hyacinth Macaw. But secondly, they can live more than 50 years, making them your go-to pet for life. Hyacinths eat a lot of nuts in the wild, thus that’s what you should focus his diet on. But fruits and vegetables are also needed. In short, eat like your macaw, and you’ll probably live a long life too.

4. Fennec Foxes – Ah, now we’re getting into true exotic territory, aren’t we? The fennec fox is found in North Africa, and has large ears reminiscent of Gizmo from Gremlins. It’s the smallest species in the canid world (of which our dogs are members), coming in at a whopping 1.5 – 3.5 pounds. It’s the only species of fox that can actually be kept as a pet, successfully. It eats rodents, insects, birds, and eggs and has a remarkable ability to go without “free water” for long periods of time. Its kidneys are adapted to restrict water loss (due to its natural habitat), and it can sustain itself on very little water as needed (it’ll absorb water through its food).

5. Sloth – Ah, the sloth, not a name we’d like to be called, but perhaps a pet you’d like to own one day? One thing’s for certain – the sloth is pretty harmless. It’s tough to be a threat when molasses outruns you. Sloths need some adaptation time when you bring them home, but soon enough, they can fit nicely in your human world. They likely won’t scratch furniture, they don’t really smell too badly, and they don’t make much noise. The biggest issue with sloths is space – they like to hang around, literally, up high. Few people have the space available to cater to a sloth’s needs. But if you want someone who’ll hug you all day long, well then, a sloth can be your best friend. 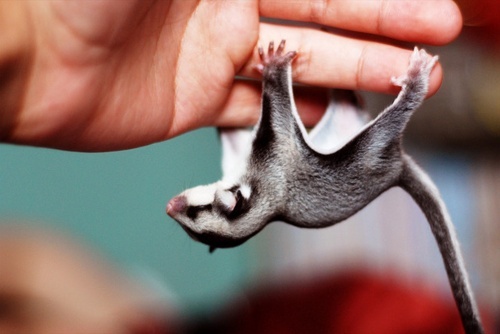 A what? Oh yes, a sugar glider. These Australian possums glide like flying squirrels and are omnivores. They like insects, sap, small birds, eggs, fruits, the kitchen sink … Despite eating all that they weigh less than 5 ounces. Sugar gliders are extremely social and friendly, thus why they make good pets. But if you get one glider, you should probably get two. Why? Because they’re nocturnal, and they really like attention during the middle of the night. Also, be prepared for a messy eater. These gliders eat only what they need from food, then they spit out the rest. Efficient for them. A mess for us.

7. Squirrel Monkey – Not to be outdone by the sugar glider, the squirrel monkey is also a happy-go-lucky omnivore. They weigh in at around 3 pounds, and while they love where they live, they are open to some serious threat down there in Central and South America. Predators from all directions like to feast on the squirrel monkey, which is why he travels in packs of 50 or so. Are you smarter than a squirrel monkey? Proportionately speaking, squirrel monkeys have the largest brains of any primate (including humans). Yes, they are smart and social, thus they can become good pets. However, they like to mark their territory, and that’s a hard habit to break. 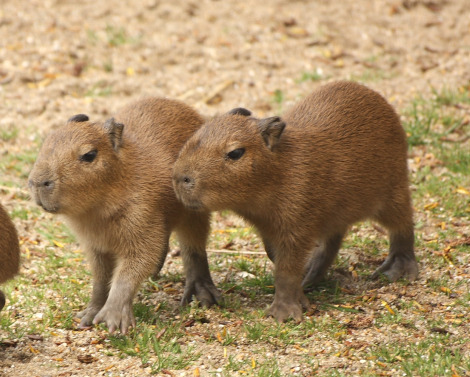 Monkeys like to monkey around. That might not be for you. Why not try a capybara, which is like a guinea pig and, at 4 feet and 100 pounds, is the largest rodent in the world. They are semi-aquatic, so they need places to swim. All they need for food is grass and waters (wow, sounds simple enough). They have been known to bite (and they have big teeth) but can be taught good manners if you start when they’re young. Rodents aren’t as tolerable as dogs, so it’s not ideal for you to get a capybara if you have kids.

9. Mini Donkey – Perhaps Shrek helped the donkey make a comeback? Either way, mini donkeys make mighty fine pets, even if you do have kids. But mini donkeys aren’t so mini. They can weight up to 350 pounds and are around 3 feet tall. They need hay, grain, water and a pasture with shelter. Their hooves need regular trimming and the companionship of another donkey or two, if possible.

10. Skunk – We thought we might round this out with one of the least exotic, (thus most exotic, if you get what we mean) pets around – the skunk. Skunks have been kept as pets for decades, and since you’re already asking – no, pet skunks don’t stink up the place. Their glands are removed when they’re young. Like any animal, skunks need to be held often when they’re young so that they get accustomed to being handled. They can be litter-trained, eat veggies and dry foods, and are curious and intelligent. They’re like a cat, only they just happen to be one of the few animals we go out of our way to avoid. Thus, to have one as a pet, well, what’s more exotic than that?

Just because you want an exotic pet doesn’t mean you can have one. Each state, heck, each district, has its own special laws and rules put into place. And, some animals become endangered, thus can no longer be kept as pets. You must check your local and federal laws before investing in an exotic animal.