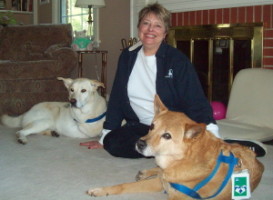 The common saying, ‘no body’s perfect’, has become a lesson learned and appreciated by the many children who have had not only the pleasure, but the honor of being taught that it’s whats on the inside that counts, not looks or how you dress.  Susan Burney’s two dogs, Fawn and Will, have only six legs between the two of them, but that never stopped them from achieving more than some teachers in today’s school systems.

Fawn and Will are TOUCH therapy dogs (Therapy of Unique Canine Helpers) and have been specially trained to provide loving attention, therapy, and life lessons to patients in hospitals as well as school children in a classroom setting.  “Kids can see real easily that (Will) is interesting and he’s fun and they want to be around him,” Burney said.  “In the same way, they can appreciate friends they might meet who have disabilities, and it’s what’s inside that counts.”

Will is a shepherd-lab mix who is missing his front right leg, while Fawn is missing her right hind leg as the result of a car accident when she was just a puppy.  Owner, Susan Burney, adopted Fawn from the Open Door Animal Sanctuary booth at the annual Greentree Festival in Kirkwood Park in 1997.  Until this time, Susan wasn’t even a dog person!  “Dogs jump on you and they get hair all over,” she always thought, but then there was this brownish, half-grown puppy up for adoption and she couldn’t resist.  The part that coaxed her into making Fawn a part of her family was the fact that she overheard other adults talking about her disability, passing her over, and it broke her heart.

Burney was teaching second grade that year at Truman Elementary School and soon found that Fawn had a knack with kids and adults.  Burney would tell her students stories about Fawn and bring her to school for visits, then she signed up with Support Dogs, where she and Fawn became a certified team in TOUCH therapy.  Fawn, now 14 years old, is currently retired from the TOUCH program, but is doing well living with Burney.

Will was taken in by Burney as a stray when he was just a year old.  “It wasn’t love at first sight like with Fawn,” she said, but he still came home with her and eventually graduated at the bottom of his obedience class.  Will and Burney visit St. John’s Mercy Medical Center once a month and go to Tillman Elementary School in Kirkwood regularly for the PAWS for Readingprogram.  “Now he makes a huge difference in people’s lives,” Burney said.

It’s truly amazing to hear a story about the difference two dogs have made in people’s lives, especially children.  Even though both TOUCH therapy dogs were missing a leg, that didn’t stop them from helping other people, and allowing children to understand that it’s whats on the inside that counts.