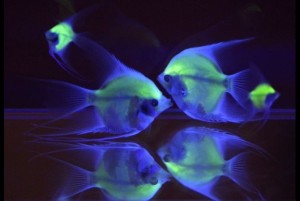 We love our glow in the dark stuff don’t we? Whether it be glow in the dark markers, clothing, ceiling stars, or – in college – the black light phenomenon, we can’t get enough of things that go “glow” in the dark. Perhaps, then, we should revert back to our former selves and wade through the waters of the world, seeing that there are roughly 180 species of fish and sharks that glow red, green, and orange.

There are two types of glowing fish – bioluminescence and biofluorescence. Bioluminescence is when organisms produce their own light through either a chemical reaction or by harboring bacteria that does the glowing on behalf of the fish.

Biofluorescence, however, is when animals absorb blue light (from the ocean) and re-emit it as different colors. Biofluorescent fish can’t turn off the glow.

This phenomenon is far more widespread than scientists once believed, meaning that when it comes right down to it – we have no idea what, potentially, this light is used for. It tells us that “organisms are using light in ways we don’t even see,” said John Sparks, curator of fishes at the American Museum of Natural History in NYC.

Since the sun barely reaches a vast majority of the ocean, sealife have to rely on unique ways to communicate with one another. Biofluorescence is one of those ways.

Photobombed by a glowing eel

Sparks’ interest in biofluorescence sea creatures began when he and colleague David Gruber (at City University of New York) were taking photos of a biofluorescent coral wall for a museum exhibit.

“We were photobombed by a green eel,” Gruber said.

That photobomb led to an intense interest, not only in how many creatures glow, but why. Since many sea creatures can’t see these glowing colors, then the different patterns and colors seem to be a pretty effective way to communicate among (and across) species.

The world beneath the waters we see look a whole lot like a rainbow, thanks to the many colors that shine bright off the fish and other creatures who call the ocean home. This includes the multi-glowing seahorse that glows mostly red with green eyes, or the Bream, who at one angle looks like he has yellow racing stripes, but from a new angle (atop the fish) those stripes turn green.

The next step for scientists including Sparks and Gruber is to pinpoint the functions behind the fluorescence patterns of the fish, in the hopes, perhaps, of recreating that function. Sure, glow in the dark markers are kind of cool. But what if you could recreate the glow wherever, and however, you wish?