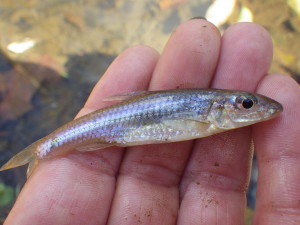 No one has ever really given the Oregon Chub Minnow much of a second (or first) thought … until now. Why would they? The rare minnow is all of 3.5 inches long, and swims under the radar, usually. But, after 21 years of fighting to shake off the scarlet “E” letter that comes with being on the endangered list, it appears it’ll be the first US fish to be taken off the list because it naturally recovered.

Previous fish have escaped the list through taxonomic revision or, sadly, through extinction.

“This is an excellent example of how the Endangered Species Act is intended to function – partners working together to recover an endangered species,” said U.S. Fish and Wildlife Service Director Dan Ashe in a statement earlier this month.

The Oregon Chub Minnow exists nowhere else on earth than within the swampy side channels of the Willamette River Basin, in Oregon. Even just a few centuries ago, there were more than 1 million minnows. But dams and flood-control projects have transformed the Willamette, which has directly impacted the minnow. As of 1993, fewer than 1,000 minnows remained.

Saving the minnow – a team effort

It took a lot of effort to save the minnow, including a well thought-out recovery plan. The goal was to restore chub habitats, which included the cooperation of local agencies and landowners, as well as the work of the US Army Corps of Engineers, who were charged with modeling dam releases that mimicked natural water-flow patterns.

Ongoing efforts helped the fish become downlisted in 2010 from “endangered” to “threatened,” and now, with more than 150,000 species across 80 various locations, it’s poised to become the 27th species – and first fish – to be saved from extinction as a direct result of the US Endangered Species Act.

More than a tiny fish

When it comes to saving animals, people tend to think about polar bears or black rhinos, not a tiny minnow. But the minnow is more than a tiny fish. The Oregon Chub Minnow represents what is possible through collaboration under the umbrella of the Endangered Species Act. Locally speaking, it also represents the health of good water quality and the ecosystem. As a result of the efforts put forth to save the minnow, many iconic wildlife in that region are set to benefit from a much improved environment.

In the exact opposite part of the country – the southwest – the endangered sea turtle is doing its best not to be outperformed by a tiny minnow. The population of the sea turtle is bouncing back, but local officials warn that climate change still poses an enormous risk. The sea turtles take about 30 – 35 years to mature, and, as this species has been protected for the last 30 years, this year’s crop of newborns is particularly rewarding as it represents the full circle of life, where the tiny turtles who became the first to be protected in the region are now spawning new life.

Still, protection is an ongoing battle. Artificial lights, motorized boats and fishing nets are all man-made dangers the turtle must combat. And a recent study reports that sea turtles eat twice as much plastic debris as they did 25 years ago.

While the population is growing, man is still doing a number on the turtle’s future. Still, some things man does is positive, as is evident by the tiny minnow that makes its home in some muddy banks of a river in the Pacific Northwest.