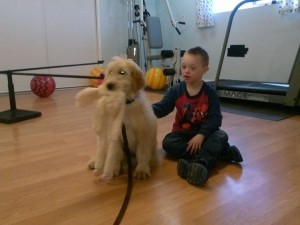 Seven-year-old Nicholas Keim of Sacramento was born with Down syndrome and diagnosed with Type 1 diabetes when he was just 18 months old. Because of his Down syndrome, it’s difficult to expect young Nicholas to check his blood sugar level on his own, which is why his family has been raising money to get a diabetic alert dog.

Not only can the diabetic alert dog serve as a lifesaver for Nicholas, but it can actually detect low or high blood sugars nearly an hour before a meter could. That would be a game changer for Nicholas’s mom, Krista, who currently checks her son’s levels every two hours … including in the middle of the night. A statistic that helps Krista running throughout the night is that 1 in 20 people with Type 1 Diabetes die in their sleep from low blood sugars. She can’t bear to think of her son being a part of that statistic.

“The dog would alert us by pawing at us or bark and could even be trained to bring us the meter to check his blood,” Krista told the CBS affiliate in Sacramento.

That kind of service doesn’t come cheap, however. A fully trained diabetic alert dog costs upwards of $10,000, although additional costs will be incurred throughout the life of the dog. To help raise money, the Kelms began to host yard sales, and then they went digital, both with a Facebook page, as well as a GoFundMe page.

The dog would serve as another line of defense for Nicholas and his family. It could mean helping Nicholas live as much of a normal life as he can, without the constant fear of unhealthy blood sugar levels that will send him into a coma.

The magic of the diabetic alert dog

Nicholas’s dog will come from Lily Grace at the  National Institute for Diabetic Alert Dogs, Inc (NIDAD). NIDAD helps match diabetic alert dogs with the people who need them most.

Diabetic dogs (well, dogs in general) have a tremendous sense of smell. They have some 225 million scent receptors, vs. a measly  5 million by us humans. Using the dog’s natural drive to hunt prey, the folks at NIDAD are able to train dogs to hone in on a distinct smell.

But what is that distinct smell?

When a diabetic person has a hyperglycemic event, many things occur inside his body. During an event, the body has no insulin (or not enough) so fat is used to help run vital body functions. During an event, the sufferer enters a catabolic state, where amino acids are used for energy. This is done by the body removing the nitrogen atom off of a molecule. This skeleton molecule is converted into glucose, and the excess nitrogen is processed through the kidneys and forms urea. Urea is excreted in urine, sweat and saliva, and released as a pulmonary vapor.

We can’t smell or sense any of this happening, but to a dog, it’s as clear as day.

The folks at NIDAD train their dogs to give an active alert when these scents are present.

Things to know about a diabetic alert dog

Most dogs NIDAD works with are Labrador Retrievers, Golden Retrievers, and Poodles, although other breeds to come into play at times.

Diabetic alert dogs are service dogs, meaning they can be taken just about anywhere, and are outfitted with vest and ID.

Diabetic alert dogs are NOT a replacement for testing, and, because of their keen scent, may end up forcing their owners to test more frequently.

As service dogs, these alert dogs are always on the job, thus while it’s encouraged that owner and dog cuddle and bond, it’s not ideal to distract the dog with too much attention from others.

At NIDAD, families can get their own dogs trained to become a diabetic alert dog, so long as the dog passes certain tests and evaluations, and has an above-normal scenting ability.

Nicholas and his family still need help to make sure they can afford a diabetic alert dog, including the costs to feed and take care of the pet. You can support the family’s cause at their GoFundMe page.