Home Behavior & Training The Importance of Playtime with Your Cat 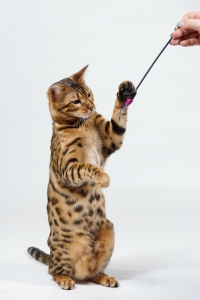 Although felines can be independent, they also crave companionship and playtime with their human guardians and with other cats. Taking just a little bit of time each day to play with your kitty can make a positive impact upon his disposition and his health.

According to Drs. Foster and Smith, cats can get very bored, anxious, and even stressed when they aren’t allowed to release their pent-up energy in the form of play. If you’ve ever watched an episode of the television show, My Cat from Hell, you already know that a cat with a lot of energy and nowhere to release it will end up destroying your belongings or getting vicious with other pets in the house and even his human companions. It’s very important to give your cat just a little bit of time each day to really run around, chasing after a toy, to act out on his natural instincts to hunt and take down prey. This will keep him content and well-adjusted.

Exercising to Stay in Shape

A lot of cats end up overweight, and it isn’t always due to a poor quality diet either. Cats who don’t exercise won’t burn off the calories and fat they ingest at mealtime, and this will inevitably lead to weight gain, which can then lead to myriad health problems, including diabetes and arthritis. Therefore, exercise through play should be an integral part of your plan to keep your cat at a healthy weight. Use a wand toy to get your cat to jump high or run along the floor, but don’t overdo it. If your cat begins to pant, let him rest.

When it comes to choosing toys that are appropriate for each feline in your household, think about the personality of each. For a shy or easily frightened cat, for example, stick with basic toys, such as feathers on a wand. For cats who are really curious and not really afraid of much, you can even purchase battery-powered mice that roll along the floor on their own. And, of course, anything with catnip in it is sure to be a hit with any kitty.

Playtime is an opportunity for your indoor cat to pretend that he is hunting for prey in the great outdoors, so when you’re dangling a toy in front of your cat, move it around like a prey animal would move. Rather than frantically swinging a feathered toy on a string in your cat’s face, for example, place it on the ground and move it slowly and then quickly, letting your cat hide somewhere to come out and pounce at the most unexpected moment, just like he would do in the wild.

Just remember that, whether you’re directly interacting with your cat during playtime or not, be there to observe the activity and ensure your cat’s safety. A lot of toys can easily be swallowed and may pose choking hazards or become lodged in the intestines.