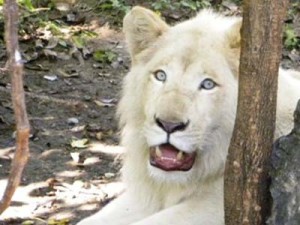 Thai police have arrested 41 year old, exotic pet shop owner, Montri Boonprom-on on charges of possessing wildlife animals and carcasses. Police conducted a raid on a Bangkok warehouse after neighbours complained about the noise and smells emanating from the place. If you looked through the gate you could see lions in cages. The police found over 200 animals including tortoises, capuchin monkeys, leopards, hornbills, meerkats, and many other exotic animals from around the world as well as Thailand. One of the most unusual finds was fourteen albino lions.

Montri has previously been convicted of wildlife trafficking and runs an exotic pet shop in the Chatuchak weekend market. He claimed the lions had been imported legally and were being transferred to a Thai zoo. However his paperwork indicated that sixteen lions had been imported and he was unable to account for the missing two animals.

Thailand has been a hotbed of wildlife trafficking for quite some time. Thai laws protect many native species but fail to protect any foreign species that come into the country. Unfortunately, this makes it an ideal place for those who sell animals to private collectors and those who kill them for parts. Many big cats are poached for their parts which are considered potent and valuable in many traditional Asian medicines. Ivory is another common import.

The Thai police did find a hornbill and a leopard boxed up for delivery. These are native Thai species and there are laws applicable to them. If convicted Montri faces up to four years in jail and a fine equivalent to approximately $1,600 USD. Unfortunately, without tighter laws and strict enforcement the trade in wild animals that are all too often caught by poachers will continue.

Poaching has decimated many species in the past century and Kenya has predicted that there will be no more lions in Africa within twenty years. In the past thirty years the lion population has gone from 200,000 to fewer than 15,000. Elephants have suffered similar losses and the long period that they nurse and raise their young means that the population does not bounce back from losses as easily as some other species do.

While you may not be able to control what happens in Thai markets, you can control your own purchases and who you advocate for. Many zoos and conservation groups lobby governments both at home and abroad to improve conservation and protection measures. Consider being a part of the solution and putting an end to the business of merchants like Montri.