Home Animal Welfare Have you Heard of These “Ugly” Endangered Animals? 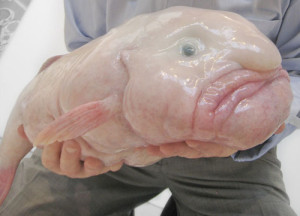 Everyone knows about endangered species like the giant panda, tigers, gorillas, etc. Their faces are plastered all over posters, websites, and campaigns to save endangered creatures everywhere. We know all about captive breeding programs in zoos, conservation efforts, and various programs designed to keep them alive. How much do you know about the Chinese salamander, the blobfish, the opossum pipefish, or the giant Palouse earthworm? They are endangered species, many of them much more at risk of extinction than giant pandas.

The difference is in the appeal of the species to the public. Species that do not appeal to the public tend to attract fewer donors to their conservation efforts. This means that zoos and conservation groups rarely devote as much attention or effort towards saving these species and their habitats. Thankfully, as many conservation groups point out, they share space with larger, more attractive species as well and in saving the habitat of one you may manage to save the home of many others that share the area.

But, is it enough? Many groups think that humanity and science are missing out on many important species that may contain secrets valuable to medical science, evolutionary science, and many other divisions. They point out how many species of animal and plant go extinct every year without anyone paying any attention. Many of the species most at risk are fish, amphibians, reptiles, and plants. While they may no gather much attention from the public, they are integral parts of their ecosystems. They are the prey of bigger species among other things and their disappearance can adversely affect many other better known species.

To combat this, concerned environmentalists and scientists have formed various groups like the Ugly Animal Preservation Society (UAPS) and Evolutionary Distinct and Globally Endangered (EDGE, a division of the London Zoological Society) to hold fundraisers that concentrate on the less attractive species and try to raise public awareness of the needs of these animals.

It is important to remember that much can be learned from these species too. For example, the naked mole rate, which is a truly unattractive animal, has shed light on biology that is now being incorporated into research into cancer and arthritis treatments. If the goal is to save as many species as possible, then perhaps focussing on habitat preservation is the best choice since it is the biggest danger facing many species.

While no one is arguing that the giant panda and tigers are not worth saving, the UAPS and EDGE are asking that you consider giving some of your donations to help less well known species as well. Please consider it.