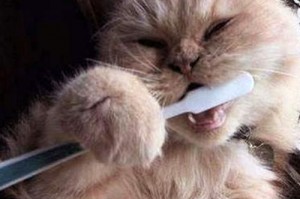 The American Veterinary Medical Association estimates that by age 2, 80 percent of dogs and 70 percent of cats will have some form of dental disease if the proper precautions are not taken to avoid the problem.  Dental disease was the most common problem found among the 2.2 million dogs and 450,000 cats treated at Banfield Pet Hospitals in 2010, according to the group’s “State of Pet Health 2011 Report.”  With 770 hospitals in 43 states, Banfield is the world’s largest general vet practice.

Infections in the mouths of dogs and cats have been linked to other serious conditions including diabetes, strokes, heart attacks, kidney disease, as well as other life threatening issues.  Gum disease, dental calculus, abscesses, as well as loose and missing teeth is the most common reason throughout the United States for taking your pet to see his veterinarian.

Symptoms
There are quite a few ways to tell if your pet has a form of dental disease, starting with the most obvious – bad breath.  If your dog or cat develops breath that smells fishy or rotten, chances are that dental issues are to blame, ranging from tarter build-up to a more serious condition.

Another common sign of dental disease in dogs and cats is a toothache, consisting of symptoms like visible cowering or pulling away if you touch the mouth, loss of appetite, bleeding from the gums, drooling, and even dropping food when attempting to chew.

Other symptoms of dental disease include loose or discolored teeth, tartar buildup, and constant licking or pawing at the mouth.

Treatment
The first thing you should do if you notice any of the symptoms mentioned above is to take your pet to the veterinarian so a proper diagnosis can be made.  If a form of dental disease is found, typical forms of treatment include a complete teeth cleaning (which will most likely involve sedation), and possibly teeth extraction depending on the severity of the dental disease.

Prevention
Proper prevention of dental disease should begin when the pet is young.  Brushing the teeth twice a day is the most common and recommended form of prevention, but it can be difficult to introduce this tactic in an adult pet.

Other forms of prevention include adding dental chews as part of a nightly routine, adding a water additive that helps prevent tartar, and even home hand scaling which involves the use of a specific tool and instructions from the vet.