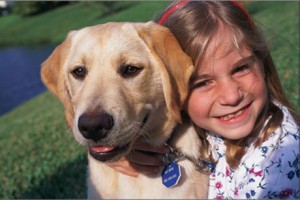 Z2RWS6CFMMEC According to study researcher David Schwebel, children make up the majority of the five million dog bite victims in the United States each year.  Because of this disturbing statistic, the nonprofit organization, The Blue Dog Trust, developed an interactive computer game called “The Blue Dog.”  The purpose of the software is to teach children how to safely interact with dogs and to recognize when it may not be a good time to approach them, hopefully lessening the possibility of future dog bites in children.

Does the computer game work?  Does it really teach children to safely interact with dogs?  The results of a study to determine just that says the answer is “sort of”.  Schwebel and his colleagues watched 76 children, ages 3 to 5, as they completed three different tasks, all of which were meant to determine if the children understood when it was okay and not okay to pet the dog.  These “tests” gave the researchers an idea of how much the child already knew about interacting with dogs safely.

“What we found is that children did learn.  They did better on the pictures,” Schwebel said.  “They actually recognized when you should pet a dog and when you should not pet a dog.”  What happened next was surprising – when the children were put into a room with a real dog, the lessons they had learned while playing the computer game were no longer at the forefront of their actions, meaning that because nothing bad happened to them during their previous interactions at the place of research, the children were not afraid when with a real dog.

Once the results of the children-tested computer game were in, it is clear that with a little more work and a few changes made, the game can be improved upon to be successful in helping children to learn how to safely interact with dogs and learning when it is okay to approach a dog.