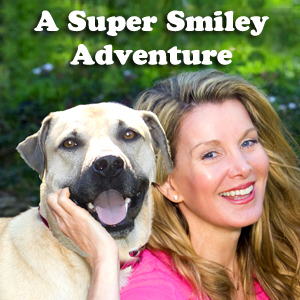 Right in the middle of this stellar lineup was a smiling mutt narrating his film.  With music and songs by Mark Winter and Megan Blake, and directed by Blake, Smiley’s film takes the audience on his mission of energizing pet adoption by creating a Flash Mob campaign and touring it across the country with the goal of finding all homeless pets forever homes.  He breaks the fourth wall directly addressing the audience as he explains.  He instructs his person, Megan Blake, on what to keep secret in preparing for his surprise flash mob, comments on the dancers and crowd and delivers this powerfully important message.

About Megan Blake: Megan Blake was born an animal lover and has brought this calling into her work.  In addition to being an actress, she is Host & Pet Expert on PBS’s Emmy winning Animal Attractions TV, was Ryan O’Neal’s celebrity Pet Lifestyle Coach on The O’Neal’s on The Oprah Winfrey Network, is a columnist for the award winning Dog’s Life Magazine, and Host of Pet Life Radio’s, A Super Smiley Adventure. A Super Smiley Adventure, Animal Attractions TV and Dog’s Life Magazine have all won Honorary Mentions at the Genesis Awards presented by the Humane Society of the U.S.  For more info on Megan Blake and to see her sizzle reel visit www.SmileyTheDog.com, www.PetLifestyleCoach.com and her website at www.MeganBlake.com

About the Tour: The Super Smiley Flash Mob 4 Pet Adoption began in 2010 and is the first Flash Mob Dance and Tour with the mission to energize pet adoption.  The bi-coastal Flash Mob Tour began in 2011 and has rocked it for pet adoption throughout the U.S. including New York City, Greensboro, NC, Jacksonville, FL, Daytona, San Diego, Los Angeles, and at events including National Dog Party Day, Daytona’s Summer of Love Festival, and at creative venues including opening the play Hairspray opening night with the costumed cast in their 2,000 seat amphitheater and joining the S. California Belly Dancers at Shimmy for the Critters.