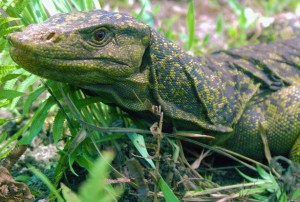 Philippines – While we don’t expect to see any reptile enthusiasts bringing these into the United States (we hope), reptile watchers will be excited to learn a new species of lizard was found on the northern Philippines island of Siera Madre, according to a study partly conducted by a team from the Department of Ecology and Evolutionary Biology at the University of Kansas.

“Rumors of its existence and some clues have floated around among biologists for the past 10 years,” co-author Rafe Brown told Discovery News.  But it wasn’t until Brown and his colleagues were able to safely collect this brand new “secretive” reptile that DNA sequencing and anatomy studies could be done.  Both parts of the study confirmed that in fact a new species had been discovered.

This newly discovered lizard now goes by the name, the Northern Sierra Madre Forest Monitor Lizard, and is in the same family as the Komodo Dragon, the world’s largest lizard.  It is distinguished by its brightly colored yellow and black stripes on its back, is over 6 feet long, and weighs 22 pounds.

Welton further says, “I knew as soon as I saw the animal that it was something special.  I had seen specimens of the other two species of fruit eating monitors, but neither of the other known species are nearly as spectacular as the Northern Sierra Madre Forest Monitor. ”

Diesmos, who took part in expeditions that studied the reptile said, “It’s a significant find because it’s a unique animal.  It only feeds on fruit and sometimes snails while most monitor lizards in the country and in the world are meat-eaters and scavengers”.

This fruit eating reptile lives high in the trees where it attempts to avoid its predators, however the new lizard faces a rapid loss of habitat as Philippine forest-cover declines at an annual rate of 2.2 percent.  According to both the Asian Development Bank and World Bank, the country’s forest cover fell from 35.5 percent in 1990 to 24 percent in 2005.