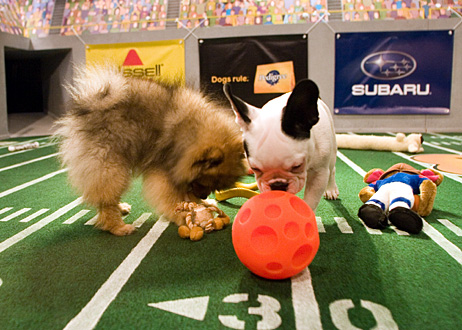 Attention pet owners and pet lovers across America, the biggest game played on all fours is returning to once again rival the largest football game of the year, the Super Bowl.  Back for its eighth consecutive year, the Puppy Bowl is aired on Animal Planet, a television show watched by pet lovers all over.  It begins February 5, 2012 at 3:00 pm Eastern time, and runs until 3:00 am.  The Puppy Bowl, the most watched alternative to the Super Bowl, will feature rescue dogs of all breeds from around the country scurrying to carry their squeaker toy across the endzone.

The Puppy Bowl works like this.  Out of all of the participating dogs, only 10 may be on the field at one time, competing to be the first to cross the endzone with the “ball”.  There are fluffy toys, squeaker toys, and toys shaped like footballs scattered across the 19 foot long battle field.  Any dog can grab any toy and if they make it across either touchdown line, they score!  “It’s the cutest two hours on television, it’s impossible to look away,” said Andrew Schechter, an Animal Planet Producer.  “We have fun making it but there is a serious message.  We talk about the importance of pet adoption, especially from local shelters.”

New addition to the Puppy Bowl of 2012 is Dan Schachner is a television host, commercial actor and announcer celebrating his rookie year as the Puppy Bowl referee.  “When I first found out Animal Planet was on the hunt for a new Puppy Bowl ref, I knew my true calling in life had come.  I quickly grabbed my camcorder and sent in an audition tape highlighting my puppy refereeing skills and sense of humor.  To my surprise, they “bit”, and now I’m calling the most important game of my life!”

Anyone one who would rather watch dogs instead of the human football game on Super Bowl Sunday will be in good company, with the over 8.6 million viewers who tuned in to 2011’s marathon broadcast.