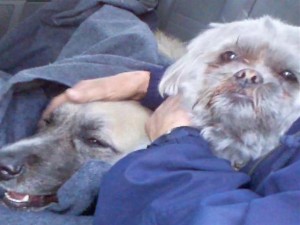 Zamora, CA – A story that could have broken the hearts of animal lovers everywhere turned out to have a happy ending last Tuesday when an early morning fire almost took the lives of not just the home owners, but their two dogs as well.  The dogs, Gizzie and Honey are being called heroes for the part they played in saving the lives of Cheryl Washington and her disabled Uncle, having alerted Washington to a fire that had started because of a furnace that was recently serviced.

“They are my hero dogs, because if it wasn’t for them, my uncle and I wouldn’t be here,” Washington said.  The dogs began barking when they realized something was wrong, waking Cheryl in just enough time to get her uncle into his wheelchair and out of the house alive.

The fire was spreading very quickly and by the time Washington and her uncle had made it outside, the flames had blocked the exit path for the dogs to escape as well.  Firefighters from several different departments responded to the fire and were told that the two dogs were still inside.  At first Cheryl was certain the fire was going to take the lives of her rescuers, but after an hour of fire crews working to find them and bring them to safety, they were finally safe from harm as well, but not without the need of medical attention.

Oxygen had to be administered to one of the dogs, but the hero’s of the day are both going to be fine!  “I couldn’t bear the thought that they had saved our lives and lost ours.  Now they’re alive.  They’re going to be OK.  They are my heroes,” Washington said.