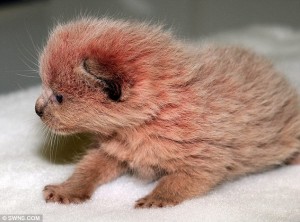 After being abandoned by their mom in a concrete factory in Redruth, a group of four kittens, only four weeks old, were luckily found and are being cared for and nursed back to health by the staff at the Cats Protection Charity.  The first step was to give the little guys a cleansing bath, where it was discovered that their fur has actually been dyed pink!  That’s right, these kittens are actually pink and will probably remain that way until their fur starts to grow out.  Nicknamed ‘Pink Panther’, she has been giving the staff quite a laugh, as hers is the only fur that won’t come clean.  The other kittens, one male and two other females have been named Clouseau, Dusty and Cerise.

It is thought that the pink hue to her fur came from the close proximity to the red pigment used in concrete manufacturing during their stay at the factory.  The dying is less obvious in the three other cats, but Pink Panther has naturally creamy colored fur so she appears bright pink.  Cats Protection manager, Claire Rowe, says they will have to wait until the pink fur has 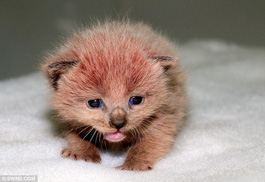 grown out, which could take months.  “They are absolutely adorable, but Pink Panther is probably the pick of the bunch.  It’s amazing.  Until we washed her we had no idea what her natural color was.”

The cats were found in the concrete factory by workers who found them cowering behind some pallets after hearing their faint meows.  They quickly collected them and took them to Cats Protection.  Upon their arrival to safety, it was discovered that they were weak and malnourished, but are recovering wonderfully and will be safe going forward.  It is believed that the kittens mother left them there, maybe in the hopes that someone would find them and give them a good home.  For now, the cats will remain at Cats Protection until they are strong enough and old enough to be given to good homes.