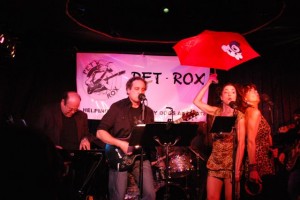 Manhattan NY – A band of veterinarians calling themselves “Pet Rox” may not be the hottest band out there but they do get their inspiration from dogs, cats, and birds that they have loved for many years.  The band new album in ready for distribution and is titled “Sniffing Around” featuring lyrics drawn from stories about pets living in New York City.

“I draw upon all of my experiences as a household vet in New York City,” said Pet Rox lead singer and founder Dr. Jeffrey Levy, a licensed veterinarian in the city.  “The stories I see, the relationships between people and their pets, between the pets and the households, the happiness and sometimes sadness I see in it all…I draw upon that for my lyrics.”

Formed as a six piece band that uses a private upper west side studio includes Jackie Krim who is a dog nanny and tambourine player, Leslie Hughs who is a back-up singer and beauty pageant producer and Eric Mauriello who is a cat rescuer and some extras.

Levy writes the bands lyrics “The tunes seem to come to me when I’m traveling between house calls,” Levy added.  “It’s usually when I’m on the A train.”  Tunes with names like “Raining Cats and Dogs,” “Urban Jungle” and “Chicken Little” are played at fundraisers all for the benefit of pets.

“I believe ultimately that the voices of our human being selves are metaphors for life, metaphors for human activity.  So ultimately, I think, the music touches on the human condition,” he said.  “Although the animals play a very important part of it.”

The band has often helped the ASPCA , Central Park Conservancy and the New York City Veterinary Medical Society raise money with catchy tunes about Levy’s cat wishing he was outside chasing birds called “Outta Here”.  “He’s been a vet for so long that he really gets into the psyche of the animals and speaks from their hearts,” Hughes said about lead singer Levy.  “It’s really, really cute.”