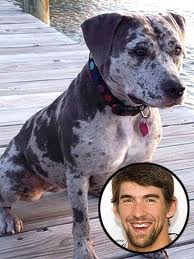 Some of the most celebrated athletes in this year’s Olympic completion in London England enjoy the companionship of their pets. It’s hard to workout day in and day out in preparation for one of the most difficult competitions in the world without the unconditional love and support that a pet can provide. Many athletes are drawn to their pets for reasons that are as unique as they are.

Ryan Lochte has recently won gold at these Olympics in swimming and has enjoyed the company of his Doberman named Carter. His dog’s name is derived from Lochte’s love of rap music and the artist Dawyne Michael Carter, Jr. or Lil’ Wayne as his more commonly known.

American diver Christine Loukas enjoys cardio workouts with her black Labrador Kona. Though her dog is not a good diver, he does tend to excel during their runs together. “She is a much better runner than me, so she helps pull me along when I start to get tired! She’s a great training partner,” Loukas said.

Track speedster Carmilita Jeter has five rescue cats named Sticks, Tye, Iverson, Casper and Tango. Jeter’s cats are known for their habit of racing around the house. According to Jeter “They constantly run around the house chasing each other as if they are in a track meet. It’s really cute.”

One of the most decorated athletes at these games, Michael Phelps, adopted his Catahoula mix after both he and the dog appeared on the today show. The two went for a walk around the studio and Phelps decided to make the friendship permanent by adopting the dog and naming her Stella.

Tennis star Venus Williams brings her Havanese “Harry” with her whenever possible. “You’re out there on your own and you need a friend who’s there for you — wins, losses — and who really cares for you,” she said in a U.S. Open promotional clip. “I’ve found that someone, and that’s Harold.”

From swimming to tennis and beyond, athletes don’t have to look too hard to find companionship is a world obsessed with having them be the best at what you do. It’s good to know that our furry friends can help them shine in so many ways.