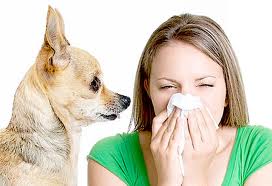 Scientists now say that having a dog or cat while children are growing up may actually lower the rate of nasal allergies as they reach adolescents. In a new study recently published in the Journal of Allergy and Clinical Immunology, one out of every four respondents reported that they have nasal allergies. Most say there allergies began when they were an adolescent.

The study also showed that small children who were exposed to many other children either due to day care or having siblings had a lower risk of nasal allergies. The more exposure a child has too greater numbers of children or pets the lower the chance of developing a nasal allergy later in life. There are always other risk factors that contribute nasal allergies like family history and mothers that smoke during pregnancy.

Other scientists have seen this pattern in those who are exposed to animals constantly from an early age like those that grew up on a farm or had a family pet before the age of five. The risks of having a nasal allergy as a young adult decreased by 30 percent for those who grew up on a farm and 15 percent for those exposed to a family pet before age five.

Family pets, in particular dogs…need not be removed to prevent allergies, and in fact may protect against them,” Melanie Matheson of the University of Melbourne. Matheson and her colleagues studied responses from nearly 8,500 adults across Europe and Australia and were divided among those who grew up around house pets and farm animals, and those with allergy symptoms like itchy eyes, sore throats and runny noses.

The Team discovered that people that were exposed to siblings or animals early in life had a lower risk of developing nasal allergies. These results were consistent in the 13 countries surveyed, “despite the differences in pet ownership and farming between countries,” Matheson said. The authors of the study note that they cannot positively prove that exposure to pets or other children are the cause of the lower risk for nasal allergies because they only had information on exposure to animals before age five. They really don’t know if exposure later in life could have affected the lower risk for allergies.

While the results of the study are promising, it would be premature to suggest that parents buy pets or have more children, said Dr. Jonathan Bernstein, professor of medicine of University of Cincinnati College of Medicine and a co-author of an earlier report on the same topic.