Home Care & Health Laser Toys for Cats: Are They Harmful? 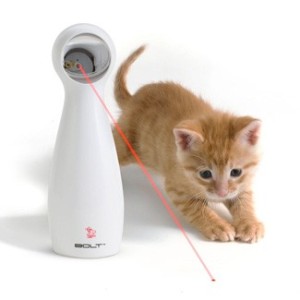 Laser toys for cats and kittens have been around for quite awhile now but their use remains controversial among cat behaviorists and veterinarians. While there is no doubt that many cats go crazy for the toy, some experts feel it continues to pose a risk for developing obsessive behaviors and increasing aggression. Others feel that it is a tool that, if used properly, can have its place in the cat’s toy box and be used with no problems.

The thinking behind the popularity of the toy is that it triggers a cat’s prey instincts and desire to hunt. Hunting is a natural aspect of play in felines and most games they play interact with that instinct. The problem with the laser is that it only mimics the chase. The cat never gets the prey which is ultimately very frustrating. In nature, no predator always catches the prey but they do catch it at least some of the time. Once they pounce on it, they can sense it under their paws and their whiskers actually feel the animal twitching. Yes, there are whiskers on the bottom of a cat’s carpals on their paws that are meant to help relay information about the catch to the cat.

Play is important. All animals, including humans, need to play. It is mentally and physically stimulating and important to maintaining a balanced life for all animals. Indoor cats in particular need play both as a form of exercise and mental stimulation. They don’t get to interact with all the animals outdoors. It is undeniably safer for them to be indoors but other games need to be introduced to provide an environment that meets their needs.

To help make up for the laser’s deficiencies, you can plant stuffed cat toys around your home. Use the laser toy to play with the cat for a bit and then finally land it on the toy so that the cat ultimately catches its prey. Reward your cat with lots of love and treats when he successfully captures his “mouse” and proves what a great hunter he is to you.

There are many other great toys you can use to play with your cat including fishing pole type toys with toys attached that you can lure your cat around with and even automatic toys and toys that squeak or make other noises. There are also a number of puzzle toys on the market that will interest most cats for hours. If you’d rather do it yourself, you can easily make appealing cat toys out of cardboard tubes, plastic balls such as Ping Pong balls, cardboard boxes and paper bags with the handles removed. Avoid string, tinsel, yarn, and other thin materials that can cut into the skin if drawn tight or cause problems if swallowed. Also avoid plastic bags as they can be a suffocation hazard. Any bags in boxes should be removed before allowing your cat to play with them.  However you choose to do it, make sure you make time to play with your cat. It’s good for both of you.