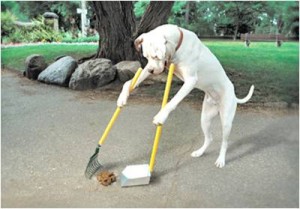 Jupiter, FL – Residents of a condominium complex in Jupiter, Fl will soon have to be more responsible about picking up after their dog goes to the bathroom, as it will soon be quite easy to determine who the culprits are that leave it where it falls!  Apparently, the problem is getting so out of control at The Village of Abacoa that dog poop is being found in the weirdest places, from the elevators to the stairwells to the lobby, that a decision has been reached to put a stop to the irresponsibility of these dog owners.

You would think it would be much simpler…if you are a dog owner, be responsible enough to carry a plastic bag with you and clean up after Fido does his business.  Instead, starting August 1 through August 31, residents of the complex will have to pay a $200 fee to have their dog’s saliva swabed in order to determine later who is not cleaning up after their dog.  The condo manager has had enough of finding dog poop everywhere at the complex and is requiring this in order to put a stop to it.  If residents fail to comply by August 31, the one-time fee will jump to $500.

The dog’s swabbed saliva will be sent to DNA Pet World Registry, where they will use the swab to determine the dog’s DNA sample.  The dog will then be issued an identification tag to wear on its collar, making it easy to catch who the culprits are.  Going forward, if a resident gets caught not cleaning up after their dog, the resident will face fines.

Eric Mayer from the BioPet Vet Lab, which runs the company PooPrints, explains that the point of the system is not to blame the pet owners by making them pay for their dirty deeds, there is also an environmental concern since more people are becoming dog owners.  He explains that the amount of poo is literally piling up.  There are too many people who don’t care about where they take their dog to go to the bathroom.

Some will argue that pet owners already have to pay extra fees in order to keep their pet with them in a condo or apartment, so hopefully this will be a lesson to all pet owners – you never know when you’ll get caught – so simply be responsible and clean up the dog’s mess!