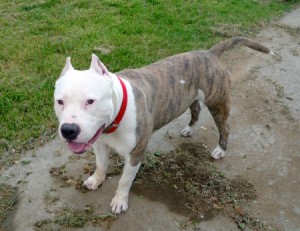 It was no small feat for Norton, a two year-old deaf Pitt Bull Terrier, to learn some sign language in order to communicate with new owners, Morgan Shumard and fiance Tim Self, and their two dogs.  A rescue group that saved Norton from euthanasia after he was left with a veterinarian taught him some basic sign language that his new family built on using treats and repetition.  Just six months after Norton went home with his new family, he has become the hit of the neighborhood!

Shumard and Self were searching to find another Pitt Bull to bring into their family, since the passing of their previous Pitt Bull had left a void.  They fell in love with Norton immediately, but were unsure if they had what it would take to care for a deaf dog.  They soon found they didn’t have to worry about that, as Norton was picking up quickly on what the rescue group was teaching him.  The couple was also concerned about how he would fit in with their two other dogs, a midsize English bull terrier and a chihuahua.

“They’re good at learning sign language because they focus more on visual input,” said Dr. George Strain, a reputable pet advisor from Louisiana State University.  In order to communicate, advocates for deaf dogs suggest stomping, hand gestures, and flashing lights on and off, as well as making body movements big enough for the dog to see.  Sign language for dogs should be limited to one hand, making the gestures simple, distinctly different, and easy for you to remember.

That’s exactly how Norton was able to learn to communicate, not only with his human family, but the other dogs as well.  “He uses our other dogs to hear noises for him,” Shumard said. “When he’s asleep we tell Gracie, our bull terrier, to go wake him up, and we stomp to get his attention so he can feel the vibrations.  I call him my one-in-a-million dog.”

Dr. Strain indicates that a multi-dog household may be the best option for a deaf dog, simply because the dog will use the cues of the other dogs to know what’s going on.  “Detecting deafness in puppies is complicated,” Strain said.  “The condition doesn’t develop until a few weeks after birth, and can be masked because stricken pups use littermates to figure out such things as when to nurse.  That’s why a multi-dog household can work better for a totally deaf canine.”

Thanks to the rescue group that saved Norton from certain death, he is proof of what a little extra love, effort, and patience, can do for a dog.