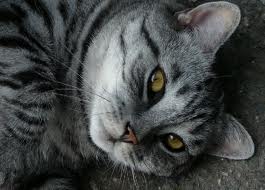 Richland, WA – In recognition of October being National Breast Cancer Awareness Month, it seems appropriate to find out that a cat named Stretchie was responsible for alerting his owner that all was not well.  If it weren’t for the cat, Joyce Fitzgerald, Richland, Washington resident, may not have learned that her breast cancer had spread into her right breast.

What started as a normal day of Stretchie trying to give Fitzgerald a little love and affection turned out to be a painful realization that her breast cancer had spread.  Fitzgerald was diagnosed with cancer in her left breast in March 2001 and was preparing to go through the necessary steps to get rid of it.  Just a week after her diagnosis, Stretchie jumped up onto Fitzgerald’s right breast, causing her to rub it, finding a lump that wasn’t there just a week prior.

The very next day she went to see her doctor where it was confirmed that a small malignant tumor was residing in her breast.  Because of these events that took place, she views Stretchie as a guardian angel of sorts.  “They would not have found that tumor for quite a while, perhaps another six months or a year,” said Fitzgerald.  “I do look at him as having a mission.”

During the entire 18 months Fitzgerald was dealing with chemotherapy, radiation, and lumpectomies, Stretchie was right there by her side offering comfort and affection.  In fact, when Stretchie had to leave her to go to the bathroom or eat, the families other cat, Moochie, was there to take his place.

“Stretchie would lie next to me,” Fitzgerald said.  “He would put his big paw on my chest, always managing to find a spot that didn’t hurt.  He would lie there all day and night.”  Both cats have been members of the Fitzgerald family since being adopted from the Humane Society as kittens.  Both cats truly exhibited the love and loyalty they had for their owner, both before and after the breast cancer discovery.