Home News House Pets Can You Catch a Cold From Your Cat? 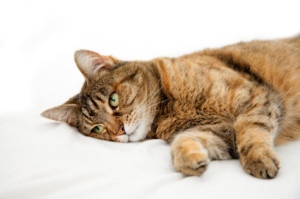 Cats may be clean animals, but they certainly aren’t germ-free. While most of your pet’s pathogens pose no risk to people, there’s a good chance your kitty is harboring at least one disease that can spread to humans. Zoonotic diseases are actually pretty common, but most aren’t serious health risks for healthy individuals.

“Those with immature or weakened immune systems, such as infants, individuals with acquired immunodeficiency syndrome (AIDS), the elderly, and people undergoing cancer therapy, are more susceptible to zoonotic infections than others,” according to a brochure prepared by the American Association of Feline Practitioners.

Cat scratch disease (CSD) is caused by a bacteria called Bartonella henselae. About 90 percent of CSD patients have had contact with cats prior to infection, and roughly 40 percent of all domestic cats carry the bacteria during their life time, according to the Oregon Veterinary Medical Association (OVMA) website.  Headache, fever and swollen lymph nodes are common signs of infection in humans, although cats rarely display symptoms.

Rabies is one of the most dangerous infections you can get from a cat. This deadly virus can kill animals and people alike, although the disease is easily remedied if caught early on. It can take weeks or months for symptoms, including behavioral changes and loss of muscular control, to develop after the initial infection. Luckily, the rabies vaccine functions as both treatment and prevention.

Toxoplasmosis is a big concern for pregnant women and immune-compromised individuals, but it’s not much of a threat for healthy adults. It’s caused by the protozoan parasite Toxoplasma gondii. About one third of the adult human population carries the disease at least once, according to the OVMA. Most people can fight off infection without developing symptoms and infected individuals usually develop immunity to the pathogen. The real danger of Toxoplasmosis is its potential to cause birth defects and miscarriages.

There are many other diseases that you can get from your cat, but it’s more likely you’ll catch them from other people, animals or objects than from your pet. Ringworm, influenza virus and methicillin-resistant bacteria are just a few of the ailments that can spread between pets and people.

It’s a little scary to think about the health risks associated with pet ownership, but that’s no reason to give up your kitty. Zoonotic diseases are still far less common than sicknesses that spread from person to person. You can also minimize the risk of catching your cat’s germs with a few simple precautions.

“One of the best ways to prevent zoonotic diseases is to promptly clean up pet waste,” according to the OVMA. “Many parasites or bacteria are not infectious in fresh pet waste, but become infectious over time and can contaminate the soil, sand or grass if allowed to sit.  Wash your hands thoroughly with hot, soapy water after playing with your cat or handling its waste.”

Take your cat in for annual checkups and keep her vaccines up to date. If your cat is healthy, she is less likely to contract infections in the first place. It’s also important to keep your kitty free of ticks, fleas and other parasites. Not only are they uncomfortable for your pet, they also help spread zoonotic pathogens.

Keeping your cat indoors is one of the best things you can do for his health, even though he won’t be very happy about it. Many zoonotic diseases come from birds, rodents and other animals, so he won’t have a chance to catch some of the nastier pathogens out there. Wear gloves when gardening or handling strange animals to keep yourself safe.

In a world full of microbes, it’s pretty much impossible to escape from germs altogether. Many people live happily and healthily while sharing their home with feline friends, so there is little to fear as long as you take reasonable precautions.