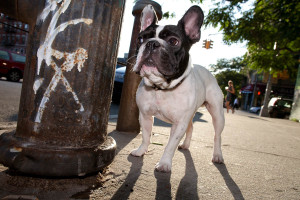 With those big bat ears and that endearing flat face full of character, it is not surprising that the popularity of French bulldogs, often referred to simply as frenchies, continues to grow. They’ve gone from being #71 in popularity fifteen years ago to being #14 last year according to the American Kennel Club. A lively breed that does not need a lot of exercise, frenchies can do well in apartments. Their short coat needs little grooming and their compact size (22-28 pounds) make them very attractive as a family pet.

Historically, they have been fancied by famous people like King Edward VII, Tsar Nicholas Romanov, Toulouse-Lautrec, and Colette. More recently they’ve been spotted with celebrities like the Beckhams, Leonardo DiCaprio, Reese Witherspoon, John Legend, Hugh Jackman, Nathan Lane, and Martha Stewart. Those comic faces were made for the big screen. They appear in movies such as Titanic (in reality a French Bulldog did die on the Titanic), Due Date, Bringing Down The House, From Hell, and Secondhand Lions. Stella, aka Brigitte, is also a regular on the television show Modern Family.

Unfortunately popularity is a double-edged sword when it comes to dogs. It tends to inspire people to rush out to get one as a pet and it also attracts backyard breeders and puppy mills who are hoping to make a fast buck. Buying a dog should never be done on impulse. You should always do your research into the breed’s characteristics and research good breeders. Take your time to find the right dog and make sure it is a good fit for your lifestyle and family.

The frenchie is a dwarf breed which means it has been bred down from a larger animal through the incorporation of a gene for dwarfism. There are consequences for this gene and it can cause disc issues due to the abnormal spinal vertebrae that are found in dwarf breeds. Flat-faced breeds such as the French Bulldog and Pug are known as brachycephalic. Although very cute, it too affects health. The shortened breathing passages can lead to a disease known as brachycephalic syndrome which often results in breathing issues. This can make anaesthetizing them for surgery risky. Being brachycephalic also means that they are much more sensitive to heat than other breeds. Frenchies can die from overheating if they overexert themselves in hot weather.

Most of the weight in a frenchie is in the front part of the body. Their pelvis is actually quite narrow when compared to the head and they have heavy chests. This can cause difficulty when whelping and most, though not all, frenchies are born by caesarean section. This is risky and expensive.  Being front-heavy also makes them very poor swimmers and prone to drowning.