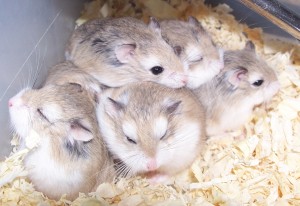 The Toronto Animal Shelter has seen their share of odd and surprising births during the course of their existence, but the recent birthing of 26 hamsters to three mothers during one birth process has the staff searching for help from others to adopt these newborns.  Animal lovers as far away as California have come forward to relieve the animal shelter from the duty of caring for all 26 hamsters, due to their lack of space to keep them all.  Currently there is an overflow of rabbits and guinea pigs in its small animal section, making for a tight squeeze with all 26 newborn hamsters.

In addition to those who came forward from California, shelter workers, pet stores, and other volunteers have stepped up to claim some of the hamsters.  Some of them are still too little and “new born” to be released from the Toronto Animal Shelter, but they are providing help caring for the three mothers and the 26 babies.  “We’ve gotten a lot of calls about them, but some are a bit too small to go off on their own quite yet,” said Laura Heslin, TAS volunteer and University of Toronto zoology student.  “However a large number of their cousins are available.”

Five of the newborns and three of the adult hamsters have been adopted so far, and nine cages have been donated with five more expected to be dropped off this week by people who have pledged to help.  The man in California who wanted to help is actually sending a monetary donation!

Unless they find new homes, the new born hamsters and the three mothers will be among dozens of rabbits, guinea pigs, other hamsters, cats and dogs featured at an Adopt-A-Thon in Dufferin Grove Park, on Dufferin St. south of Bloor St. W, on Saturday and Sunday June 11 and 12.  If you want to help in any way or adopt any of these hamsters, you must do so in person at the Exhibition Place shelter, next to the horse palace, between 10:30 a.m. and 6:30 p.m. on any day except holidays, or at Pet Valu stores at 1176 King St W. and 1397 Lawrence Ave. W.

There is a small fee for adoption, which goes to the shelter, and is only $5.65 (tax included).  Cage donations will be accepted at the shelter’s C.N.E. site, or can be pledged at: [email protected].