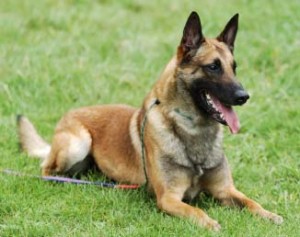 Georgetown, TX – Two brave dogs of rural Georgetown deserve commendation and praise for the help they provide in bringing closure to the families of missing soldiers in Iraq.  Major and Ana are Belgian Malinois, trained to search for the bodies of fallen soldiers for the U.S. military.  For most of the past three years, these dogs braved sandstorms and the occasional threat of sniper fire overseas with their trainer, Joe Worsham, one of three handlers of human remains detection dogs in Iraq and Afghanistan.

In 2008, Worsham was chosen by the Florida-based American K-9 Detection Services to head to Iraq.  “I thought it would be interesting,” he said.  “I thought there was an opportunity there to get paid while I did something that I had a strong passion for.  It’s about bringing an individual home that has paid the ultimate sacrifice for our freedoms.”  When a mission began, Worsham, Major, and Ana headed out with a platoon, usually under the cover of darkness.  The danger that awaited was always lurking over the heads of the team, but Worsham, who wore an Army uniform, an armored vest and a helmet on missions, said he felt safe most of the time under the soldiers’ protection.  Prior to letting the dogs loose, an explosive detection dog handler, like U.S. Army Sgt. Dennis Asher, a kennel master in Iraq, would search the area to make sure it was safe.

Major and Ana would sometimes work in 120-degree heat in the desert, searching for 20 minutes between breaks.  Both dogs faired well during the missions, being successful 30 percent of the time, said Worsham.  “The rest of the time, the dogs were successful in eliminating a location.”  When Major successfully noted a location, he would bark, alerting the military to take over and retrieve the body.

When Major and Ana are not oversees, they will be found with Worsham on their 8-acre property in rural Georgetown, hunting for tennis balls in the tall grass on the land.  Worsham has also traveled to other sites across the state, traveling on his own dime to search for bodies and test the limits of his dogs.