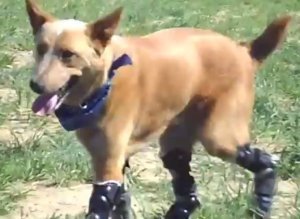 It was a day come true for Nakio, a once abandoned Red Heeler Cattle dog, when he could once again run, jump, and play.  As the first dog ever to be fitted with all four prosthetic legs, Nakio is receiving a lot of well deserved attention.  This story is an extraordinary example of how far people will go for the welfare of their pets and how much this dog is loved by his current owners.

What started as a normal life for Nakio and his brothers and sisters in Nebraska quickly turned into a painful case of abandonment.  After his owners home was forclosed on, they fled, leaving Nakio and the other dogs of only 5 weeks old to fend for themselves during the harsh winter.  Areas of the basement became filled with water, where Nakio’s paws got stuck as the water froze.  Thankfully, the litter was taken to an animal rescue center, but it was already too late for Nakio’s paws.  As he was cared for, his paws were lost to frostbite and healed to stumps.

One of the animal center’s Veterinary technician’s, Christie Tomlinson, decided that Nakio would be the perfect addition to her family, in which she already had a Jack Russell terrier mix named Poki.  Being certain that something could be done to fix the damage that happened to Nakio’s paws, Tomlinson sought the help of OrthoPets, a Denver company that specializes in pet prosthetics.

OrthoPets was up to the challenge of making Nakio the first ever dog to have 4 prosthetic legs, allowing him a renewed chance at a happy life.  The prosthetics were designed and fitted by Martin Kaufmann, founder of OrthoPets, who said, “Even though he was hobbling, he was still just trying to enjoy life, Nakio’s personality was great.”

Nakio is now a happy pup living with a family who adore him and cherish the fact that he made it through such a trying ordeal.  Watch the video about Nakio and his 4 bionic legs!