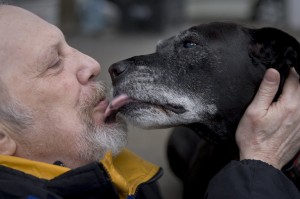 Portland, OR – An elderly dog from Oregon has been nominated for the National Dogs of Valor Award because of her role in saving her owners life.  Ceili (pronounced Kaylee), a 15-year-old Lab mix, showed her true devotion to owner, Danny Fincher, when she attempted to make it clear that there was a problem.  Ceili followed Fincher around all day, sniffing his breath, and “annoying” him, until finally the problem was very apparent – Danny Fincher was getting ready to suffer a heart attack.

Ceili immediately began barking for help, alerting Danny’s wife, Gayle Jewell, who was in another room watching television.  In a daze after the attack, Fincher, 62, tried to crawl up the stairs, but the dog tugged him down and then ran to Gayle.  Barking furiously, Ceili ran between the two until Jewell realized that her husband was ill.  Gayle then took Fincher to Legacy Emanuel Medical Center, where he was treated within 20 minutes of his attack, thanks in part to Ceili.  Doctors confirmed that he had indeed suffered a heart attack, and after spending three weeks in the hospital and having bypass surgery, Fincher was able to return home.

Danny and Gayle are extremely grateful to Ceili, who was clearly aware that a problem existed.  “There’s no question she saved my life,” Fincher said.  Dr. Jonathan Lindner,  a cardiologist at Oregon Health & Sciences University, said quick treatment after a heart attack is crucial.  “The bottom line is the earlier you get in the better,” Lindner said. “You lose more heart muscle the longer you wait.”

In recognition of Ceili’s part in saving Fincher’s life, she has been nominated for the National Dogs of Valor Award, sponsored by the Humane Society of the United States.  Ceili was nominated along with nine other dogs who also proved to be hero’s in their situation.

The idea that Ceili may have been aware of the problem isn’t far-fetched, said one specialist.  “Dogs can be trained to detect seizures, and research is looking at canines sniffing out bladder and lung cancer,” said James Serpell,  professor of animal welfare at the University of Pennsylvania.  Although he hasn’t heard of cases involving heart attacks, he said that falls within the range of possibilities.  “We’ve bred dogs to be focused on humans,” Serpell said.  “So they have this combination of heightened sensitivity and heightened attention to their owners, and that combination gives them sometimes what looks like miraculous insights.”