Home News Why We Think the Wolf is Evil 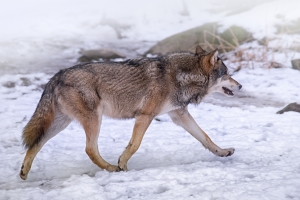 When we’re little kids, we learn that slow and steady wins the race and other helpful lifelong lessons, thanks to a tome of fairytales. But those same fairytales that guide us toward a successful adulthood (we’d like to think) are also partly responsible for one of the world’s worst stereotypes – that wolves are evil.

Think of it: in “The Boy Who Cried Wolf,” a wolf attacks the boy’s flock of sheep. In “Little Red Riding Hood,” the wolf eats the grandmother, and tries to eat Little Red as well. In “The Three Little Pigs,” the wolf is out to destroy each and every one of those little pig brothers.

It’s no wonder that we grow up deathly afraid of wolves, convinced that they’re nothing more than rabid animals who’d pounce at the opportunity to kill each and every one of us.

But that’s so far from the truth.

In reality, wolves are actually pretty tame animals. They’re big on family, and smart as a whip. And, in fact, wolves have a relatively instinctual fear of humans. Rather than pounce on us, they’d likely run the other way. It seems that over the generations, wolves have learned that humans can do them harm, and so they’d rather not take a risk.

So, how did wolves get such a bad reputation?

Wolves have a lot of things going against them. First, there are those fairytales. We lay the foundation for the rest of our lives in our childhood, and stories like “The Three Little Pigs” become ingrained in our minds. Wolves are working with a strike against them before we even lay eyes on them. Of course, those fairy tales had to start somewhere. But where? Centuries ago, were wolves far more vicious than they are today? Is that why fables and fairytales used the wolf as the go-to villain?

That’s not likely. In reality, one of the reasons why wolves were so feared centuries ago was because of their howling. A strong howl can be heard miles away, as though it’s right at your doorstep. That haunting noise alone is enough to give anyone the shivers; the idea that the beast behind the howl might be at your front door was enough to drive you mad. It’s easy to imagine children chilled to the bone from a howl, saying, “Mother, what is that awful noise?” and the mother repeating, “That’s a wolf, my dear.”

Hear that howl enough times and you too would likely start building up a stereotype against all wolves.

Another theory is that the wolf was given this reputation because of its tendency to kill livestock. This theory has two potential possibilities:

Either way, this particular theory is a bit unfair. Wolves actually don’t have a tendency to go after livestock. It happens, sure, but not regularly. In fact, wolves have a knack for living among people, and will search for their own space off in the wilderness, so as not to impose on a human’s “space.”

Still, there is a reason why wolves might flock to livestock, and we only have ourselves to blame. The lack of wilderness (thus, animals) out there is staggering. The wolf’s habitat is getting smaller. 10 out of 10 times wolves would prefer to be far off in the distance, nowhere near humans. But that’s becoming increasingly harder as we keep expanding our neighborhoods and reaches. With lack of space working against them, it’s only natural for wolves to start hunting livestock – it’s the only animals nearby.

There’s no hope of the famed fairytales of our childhood going away anytime soon, meaning that this stereotype against wolves will live on for eons. Nowadays, however, there is more education on the facts behind wolves. These facts include:

Does this mean you should go out and pet your local wolf? Heck no, besides, good luck getting near one. Remember, they fear us probably more than we fear them. But it does mean that the wolf gets a bad reputation as being some evil killer, when in reality it’s one of the most intelligent and astounding creatures in our midst – one whose habitat is slipping away.