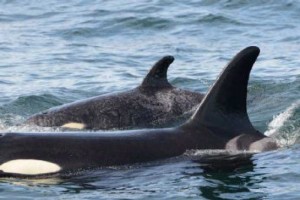 In 2002, a young killer whale was noticed off the shores of Washington State in the Puget Sound. The whale was alone which is very alone for orcas since they normally travel in close family groups called pods. Biologists were able to identify her by her vocalizations as belonging to a pod that resided 300 miles north of there in the waters around northern Vancouver Island. She and her mother had failed to return with their pod and it was presumed that her mother had died and she had been orphaned.

Naming her Springer, biologists decided to intervene and nurse the young whale back to health and then attempt to reintroduce her to her family pod. Her skin was in poor condition, she had worms, and bad breath all of which pointed to health issues. She was also nudging and bumping pieces of driftwood and boats which indicated that she was lonely and had poor social skills.

They penned her in an ocean enclosure at the Manchester, Washington government research station and nursed her back to health. Although her interactions with people and boats was limited as much as possible, a wild killer whale had never gone through this type of human intervention and then been successfully reintroduced to the wild. Once Springer, nicknamed Little Orca Annie by the press, was again in good health, she was moved north by high-speed catamaran. There she was penned for a week to let her adapt to the waters and environment and then released near her family pod. At first she swam towards driftwood and bumped it rather than approaching the pod but gradually over a period of weeks she began to be seen more and more with her pod.

This year, Springer was spotted with her pod again. Now 13 years old, she had a young calf of her own with her. The calf is approximately seven feet in length and mother and baby appear to be in good health and doing well. It is the ultimate indication that Springer was fully accepted by the pod she was introduced to over a decade earlier. For wildlife biologists, it is confirmation that under the right circumstances with the right amount of knowledge they can intervene in situations like Springer’s and successfully reintroduce the animal to the wild. This is great news for orcas that get separated from their pods and need a helping hand from biologists.