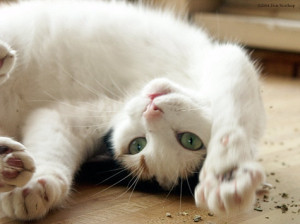 Nepeta cataria is a big hit in the feline world. Lions, tigers and domestic short hairs all love to sniff and munch on this common herb. It’s a pretty effective recreational substance for your kitty whether it is fresh or dried, as long it’s stored in a sealed container. While the “high” cats get from catnip is paralleled to the impact marijuana has on the human brain, catnip is not toxic or addictive for your feline friend.

Catnip is common throughout the United States and Canada. It currently thrives in every state in the US except Hawaii and Florida and grows in most Canadian provinces, according to the United States Department of Agriculture PLANTS Database.  The herb is considered invasive because it is not native to the North American continent, but it does not pose a particularly significant ecological threat.

Catnip is a type of mint, so basil, spearmint and many other well-known herbs are considered close relatives. Even though it’s best known for the amusing reactions it gets from cats, the herb also has various medicinal properties. It acts as a mild sedative when consumed by humans and has potential as an effective insect repellant.

So, what makes cats go crazy for catnip? The answer: nepetalactone.

This compound occurs naturally in the catnip plant and is similar to several other compounds, including actinidine and iridomyrmecin, that stimulate the feline brain, according to an American Chemical Society article. Nepetalactone is stored as oil in the herb’s leaves and stems, so don’t expect your furry friend to leave much of the plant behind if he happens upon some catnip in the garden.

Even though researchers have identified the nepetalactone oil as the “active ingredient” for feline recreational use, there is still a lot to learn about how it actually works. Some scientists guess that it acts like a pheromone, triggering a happy and pleasurable sensation in cats.

Some cats react by rolling and squirming in the catnip, while others take a few whiffs before zooming around the room uncontrollably. Other kitties get right down to business and munch away at their supply of dried leaves and stems, which can actually make them complacent or relaxed rather than energetic.

Not every cat likes catnip. In fact, about 50 percent of cats have no reaction to the plant at all, according to the Humane Society of the United States. Genetics seem to be the main, and perhaps only, factor that determines if a feline will have a taste for N. cataria. While the love of catnip is inherited, the gene is distributed evenly among cats of all breeds, color and gender.

If a kitten doesn’t react to catnip, it doesn’t mean he won’t as an adult. The feline brain has a lot of developing to do during the first few months of life, so cats can’t experience a reaction to catnip until they are at least several months old.