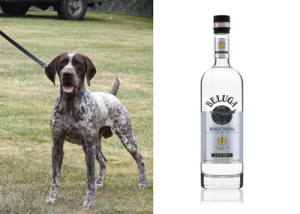 The “hair of the dog” is taking on new meaning these days. From a Ukrainian hunting dog that knows what his master really wants to an Australian puppy that was saved by ingesting vodka, it seems that dogs and vodka just go hand in paw lately. Both Tsar and Cleo are examples of good things that can come from alcohol consumption.

Tsar is a German Shorthaired Pointer (GSP) that lives in the Ukraine. GSPs belong to a group of dogs known as versatile hunters. They are meant to locate the game, point to its location, flush it out, and retrieve it to hand after the shot. This group also includes Weimaraners, Vizsla, Wirehaired Pointing Griffons, Italian Spinone, and German Wirehaired Pointers. Capable of hunting fur and feathered game, there are few limits to their talents in the field. They are favored by hunters that seek an all purpose gun dog. Tsar demonstrates just how versatile they can be. He has been trained to fetch bottles of Ukrainian vodka from his master’s truck and bring it to his owners after they’re done hunting. Talk about an all purpose gun dog.

Cleo is a nine week old,  American Staffordshire Terrier puppy in Australia. She ingested antifreeze. Antifreeze is extremely toxic to dogs and small amounts can easily kill them. The ethylene glycol in antifreeze causes severe kidney damage and is often fatal. Symptoms of antifreeze poisoning include disorientation, seizures, difficulty walking, drooling, and vomiting. In Cleo’s case, she had licked a bit of antifreeze off a car part. Cleo began to appear disoriented and had difficulty standing. They rushed her to their vet.

One possible treatment for antifreeze poisoning is pure alcohol (ethanol). It dilutes the toxin and helps the body rid itself of the ethylene glycol. Cleo’s vet felt it was worth a try to save the puppy’s life. He ran a feeding tube into her stomach and over the next two days she consumed almost a third of a bottle of pure vodka. It saved her life. Most dogs aren’t that lucky. Treatment needs to be begun within 8-12 hours of ingestion to effective. As little as a tablespoon can be fatal depending on the size of the animal.

It is not usually advisable to give your dog alcohol. Dogs can get alcohol poisoning and their body mass is much smaller than ours but with a higher metabolism which makes knowing when is too much difficult. Therefore, you should never offer your dog alcohol unless under treatment by your veterinarian. Feel free to have your dog offer you alcohol though if you can train him to fetch the bottle.