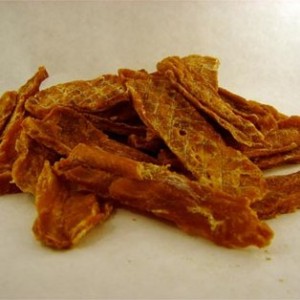 Over the past six years, more than 3,600 dogs (and 10 cats) have been reported as getting sick after eating jerky pet treats. Of those thousands of sick animals, 580 have died. Yet, despite these large numbers, the FDA still doesn’t know, or hasn’t reported, any specific brands of pet treats that are responsible. All they’ve said, to date, is that the animals mostly ate a chicken or duck jerky treat. The other commonality is that it appears most of the treats were made in China.

The typical symptoms found in these pets include diarrhea, lack of appetite, and sluggishness. And while we can determine the symptoms, there still remains a mystery over the cause of the illnesses. The FDA, stumped over this since 2007, has sent an open letter to US veterinarians asking them to track and send detailed information about any animals who become sick following the consumption of jerky treats. This includes sending the FDA urine samples to provide the agency with a better understanding of how these animals are acquiring Fanconi syndrome, the most common result of this mysterious tainted jerky. Fanconi syndrome is a kidney disease which happens to be particularly rare to dogs, thus why determining the source of the disease is so important to the FDA.

Stopping short of a recall

We’ve all seen the FDA recall food items due to health concerns, such as bacteria found in spinach, or chicken. Once they determine the source of the issue, they issue a massive recall of that product. But that hasn’t happened here with the dog treats, mostly because the FDA has yet to determine any one brand or manufacturer who is responsible. What the agency has said is that these jerky treats are not needed in order to provide pets with a balanced diet (their way, perhaps, of saying don’t feed your dog jerky treats right now). They’ve also publicly announced that once they do find a specific, adulterated product, they will recall them.

A formal recall does more than pull tainted treats off the shelf. It provides the public with more information on who’s tied to this mess. Since there is no formal recall, no brands can be publicly linked to the illnesses; however, a previous FDA analysis indicated that three of the top-selling brands of jerky treats in the US were mentioned in connection with pet illnesses.

Any pet owner reading this will have likely asked, by now, what can they do to keep their pets safe from a potentially fatal reaction to tainted jerky treats. Many people, including pet columnists, vets, and owners of pets who have become sick or died from jerky treats, collectively agree that the most logical action is to stop feeding your pets jerky treats. Steve Dale, a columnist for the Chicago Tribune writes, “There are countless safe manufactured treats, available in all shapes and sizes, not to mention healthy snacks from your own refrigerator, such as small slices of apple or banana, blueberries or mini carrots. Also safe (as far as we know) are jerky treats made in the U.S.”

His last statement should be echoed. To date, there have been no signs of U.S.-made treats being tied to any illnesses, thus if you feel the need to feed your pet treats (rather than the options Dale listed above), make sure that the treats were manufactured in the U.S., which you can determine on the package label.

The safest bet, of course, is to avoid jerky treats in general until this whole thing gets sorted out. The fact is dogs don’t need jerky treats, and, to be quite honest, would live a healthier life without them. Don’t take chances until the FDA determines the source of this mystery. That is the only way to avoid putting your pet at risk.